The original plan for the Katutubo Exchange (KX) international outreach program was to conduct it to foreign nationals but we have realized that there are Filipino communities abroad which need to know more of their Filipino heritage. 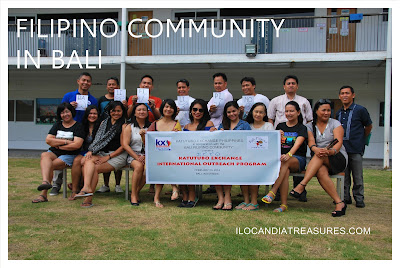 So, since I am visiting Bali Indonesia on a weekend of February, I have contacted the group Bali Filipino Community and was able to communicate with it’s president Mrs. Angelita Los Banos and requested them to implement KX outreach program in their community. After a few days, I got a confirmation from her. I prepared the things which I needed for the outreach such as powerpoint presentation, manila papers, and the tarpaulin.

From my accommodation close to the airport, I took a taxi going to the venue of the outreach program. It is an international school called Sekola Lentera Kasih located at Kerobokan in Bali. I tried to get there early to avoid inconveniences. I arrived before 1pm and the schedule was at 2pm. One by one, the participants arrived at the site. 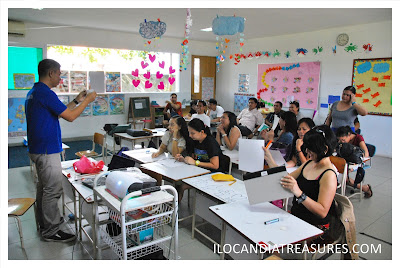 I was surprised that all of the participants were teachers with a total of 20. One indigenous Applai woman from Mountain Province was present. There was only one child present. All of them came very interested to participate in the seminar-workshop.

I introduced Katutubo Exchange Philippines to the group by citing its visions and objectives as well its accomplishments. Later, I talked about the Philippine Indigenous Peoples and traditional arts. Some participants from Iloilo were surprised to know also of the Panay Bukidnon tribe that exists in their own province and they expressed their intention to visit their community when they get the chance to go home. 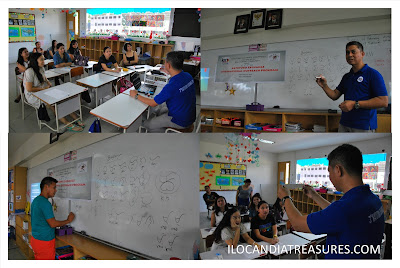 The participants had fun in learning the Baybayin, the ancient Filipino script. That was their first time to write and read baybayin. A few of them was so quick to read some of the words which I wrote on a bookmark. They even wrote the name of their association in Baybayin.

After an enjoyable workshop, we capped the activity with snacks they have prepared. I brought royal bibingka from Ilocos for them to taste and they loved it. I also gifted the president with an inabel shawl. Then lastly, we had a group photo. I witnessed their group in the election of their officers.
Posted by Edwin Antonio at 1:20 AM 0 comments

KX Outreach for the Iloko kids

Since Basco Vice Mayor Ann Viola was in town on February 16-17 for our business meeting, I made use of our break to introduce her to the volunteer members of KX in Ilocos Norte. We had meeting over lunch on the first day. On the second day when we were in San Nicolas town for a site visit and inspection, we visited the elementary school then conducted a short outreach program for the Iloko kids of the same school. 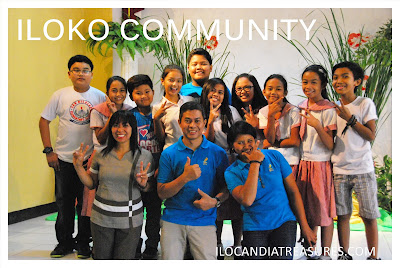 The children are officers and members of the student heritage organization. There were ten of them plus their adviser/teacher took part of the short program. I introduced to the participants the Katutubo Exchange Philippines and later introduced Vice Mayor Viola, She delivered a talk on the Ivatan culture. All of them got excited hearing from her. 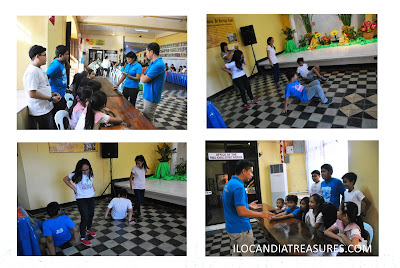 At the last part of the session, she shared an indigenous Ivatan game called tatus relay. Tatus is the Filipino term for coconut crab. This is an exotic food from their island home. The kids had a great time playing then later concluded the session with a short farewell message and a photo opportunity.
Posted by Edwin Antonio at 5:58 AM 2 comments

Because of the passion to help underprivileged children and the desire of these two individual youth namely, Neil Joaz Lagundino and Gee Diaros to take part in the Katutubo Exchange Outreach Program, I tagged them along to the KX outreach activity for the Iloko kids of Brgy. Casili in the city of Laoag. 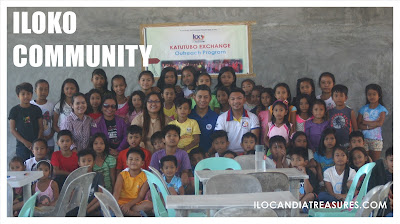 They got excited when I scheduled the activity on February 6, 2016. I contacted the principal of Casili Elementary School and they invited their students including the members of the Casili School of Living Tradition to participate. A total of 55 Iloko kids have joined the activity. Five parents and one teacher were there to look into the activity. Fanny Jose also helped us organized the activity by setting up the venue and Jelmar Castro assisted me.

Initially, I introduced to the participants our organization Katutubo Exchange Philippines. A volunteer organization that conducts annual gathering of indigenous children from around the country and the regular outreach activity to the various communities. 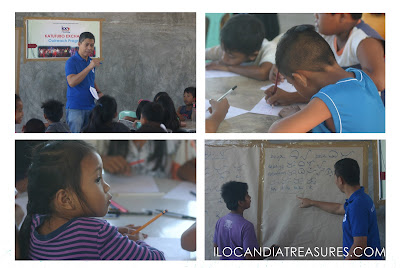 I started the workshop on writing the baybayin, the ancient Filipino script. They tried to copy the calligraphy and most of them copied them well. Then later I asked them to write in baybayin the local words I gave. They were able to write well. I made some few bookmarks and wrote words in baybayin. I let them read and fortunately they can interpret them. Whoever reads it well then gets the bookmark. The kids really learned so quickly.

After the baybayin, Gee conducted the origami, a Japanese term for folding papers. She provided them each with a white paper and a guide. Later she instructed them to fold the paper until they were able to get the figure of a flapping bird. She had more to teach but we lack time. 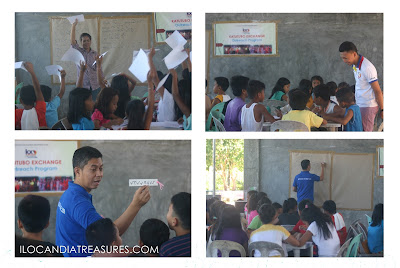 Neil followed after Gee’s session. He taught and demonstrated the soran bushi dance. It’s a dance of the Japanese depicting fishing. He learned this dance on his participation to a youth exchange program in Japan. The kids had fun learning the dance and they were provided by a white headband provided by Neil. The participants were grouped into three and were asked to perform and presto they had a wonderful presentation.

Since the kids enjoyed the session we taught of coming back in their community in the coming days.
Posted by Edwin Antonio at 7:02 AM 0 comments

With the partnership of Katutubo Exchange Philippines and the Ilocos Norte Medical Society (INMS) being forged since 3rd Katutubo Exchange program, they again tied-up with another project called Katutubo Exchange Outreach Program for the Isneg children of Dumalneg in Ilocos Norte held on January 10, 2016. There were 50 katutubo kids who participated in the activity, one KX alumnus Jesli Manuel and three young Iloko kid volunteers namely, Joshua Juan, Jessa Galandez and Jelmar Castro.

The town of Dumalneg is one of the indigenous cultural communities of the province of Ilocos Norte and it is home to the Isneg population. They are also called Isnag, Yapayao or Apayao.

It was the initial plan of INMS to conduct a simple gift-giving for the katutubo kids and later the president Dr. Miramar Bumanglag has thought of doing it meaningfully by asking what else should be done.

It is the objective also of the KX Philippines to conduct outreach activity on health and nutrition so I suggested INMS to conduct orientation and lecture on health care. Dr. Liza Marie Paz-Tan, Dr. Sheila Rabang and Dr. Bumanglag did the lecture and demonstration on proper handwashing. They also inspired the kids of what is the job of a physician and how to become one with a talk from Dr. Callangan. All the INMS officers and members distributed the health kits, gifts and the lunch meals. Dr. Jeffrey Suangco, president of Rotary Club of Laoag has also joined our group. He gave an orientation on oral and dental care since he is a dentist. He also gave out toothbrushes, toothpastes and slippers.

Before we started the program, we were welcomed by the people especially from the office of Mayor Espiritu represented by Ms. Arlene Galleng Domingo. Poetry and traditional dances were performed by the katutubo participants followed by the Iloko traditional dances by our young volunteers.

Later, I introduced our volunteer group Katutubo Exchange Philippines, its missions, objectives and accomplishments. Since it is the aim of the organization to promote traditional art and indigenous cultures, I launched and conducted lecture and workshop on Baybayin, it is the ancient Philippine script which has been forgotten. The kids instantly learned on how to write and read Baybayin. It was a fun weekend with the katutubo kids and everyone enjoyed. They gifted us with boxes of rootcrop harvests namely: togui and laya. We took our lunch sponsored by Dr. Fernandez at his own restaurant in Bangui.
Posted by Edwin Antonio at 2:11 AM 0 comments

I went to attend the age-old festival Ati-atihan of Kalibo in Aklan so I decided to take my flight to Iloilo because it’s cheaper and so I can visit as well the community of Panay Bukidnon. I contacted the alumni of 3rd Katutubo Exchange namely Wilson Lastrilla, adult leader and former katutubo participants Reychel Mae and Jhon Denver to organize the Katutubo Exchange Outreach Program. 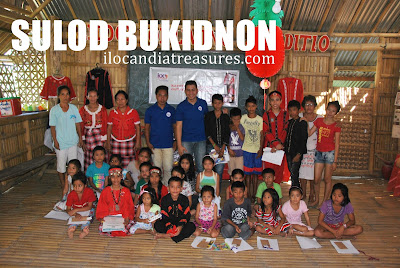 The said activity was held on January 16, 2016 at the School of Living Tradition center of Brgy. Agcalaga in Calinog town of Iloilo. Straight from the airport, I went to the community of the Panay Bukidnon also known as Sulodnon or Tumandok, by taking a van and rented a single motorcycle. It was a remote place located up the mountains. I was accompanied by volunteer Mark who helped in the documentation of the activity.

There were 25 children and six elders who participated in the outreach. There were performances such as traditional dances, indigenous music and chanting to welcome us. Wilson opened the program. I introduced our group Katutubo Ecxchange Philippines and later asked the alumni to share their experiences of 3rd Katutubo Exchange held in Manila. I also presented their certificates of completion of the program. 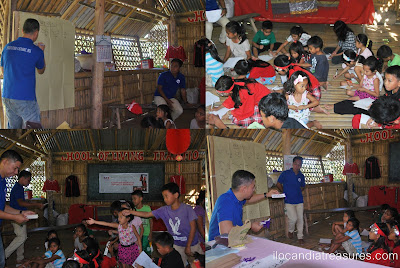 I brought with me bookmarks which I made and wrote some phrases on Baybayin and asked them to read and instantly most of them can read it. After reciting correctly the words and phrases then I gave away the bookmarks. There was one little girl who can quickly read the bookmarks and I was impressed so most of the time she gets the bookmarks. The elders were able to follow also our workshop and I told them to employ Baybayin in their designs in their tribal embroidery Panubok. 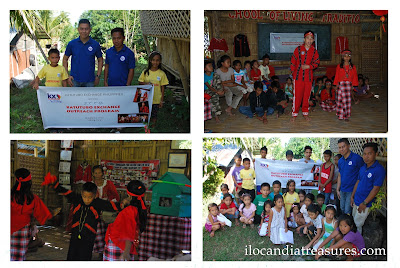 After the workshop, we took snack – royal bibingka, which I brought from Ilocos. While having snacks I asked them who wants to join the next KX and they all raised their hands. I was happy to see that but I told them that we will consider their community’s participation as we can plan it out. Later, we concluded the activity by thanking them all especially the KX alumni members.
Posted by Edwin Antonio at 3:11 PM 0 comments