I am happy that my article about Kapurpurawan Rock Formation of Burgos in Ilocos Norte landed on the pages of View, a travel and lifestyle magazine and my photograph of it was chosen to be its cover on the issue of July 2013. Here's the full text:

Text and Photos by Edwin Antonio

There is much to see in the town of Burgos in my home province of Ilocos Norte, but one that is a definite must-see for visitors is the Kapurpurawan Rock Formation. The road going there used to be rocky and bumpy, but now it has already been developed to accommodate the rising number of visitors coming to catch a glimpse of the picturesque white boulders.

Burgos is a fifth class municipality with a population of around 9,000 people. Formerly known as Nagpartian, it was renamed after the martyred Roman Catholic priest Jose Burgos who was born in Ilocos Sur. The town boasts of natural attractions such as Kapurpurawan, Tanap Avis Falls, Palpalookada, Kaangrian Falls and Digging Falls, as well as cultural treasures such as the Cape Bojeador Light House and the Gamet Festival.

“Kapurpurawan” literally means “brilliant white” or “whiteness,” taken from the Ilocano root word “puraw.” The rock formations come in different shapes including the iconic head, the cradle and the resting dragon. This rock formation turns even whiter during the months of April and May when sea waves are at their lowest. 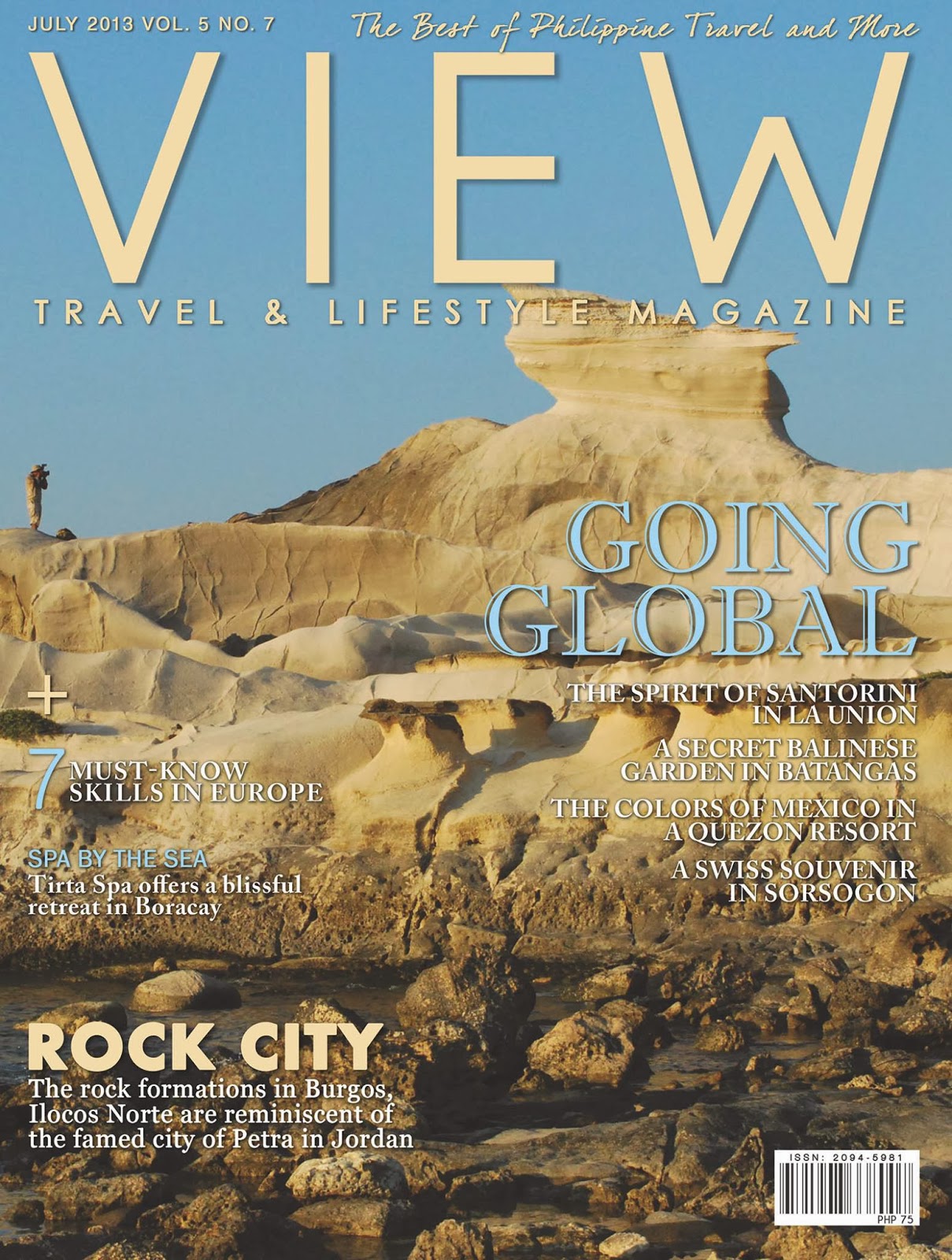 The site was formed by a geological deposition through the process of sedimentation where minerals and organic particles settle and accumulate or it precipitates from a solution. The rocks were carved out from the surrounding sandstone by both mechanical and chemical weathering. Wind, sand and water are the primary weathering agents. As a result, it created unique rocks of different shapes and formations.

This is indeed a unique place to visit because it can only be seen in Ilocos Norte and nowhere else in the country. It can be likened somewhat to the majestic rock city of Petra in Jordan. However, Petra appears red rose, while Kapurpurawan looks white. It also closely resembles the Skiadi, a giant mushroom-shaped stone in Kimolos, Greece.

Kapurpurawan is located in the rocky coast area of Barangay Poblacion. From the national highway, it is only a short walk to the site. For a more pleasant trek, horses are available to ride to the rock formations for a P100 fee. 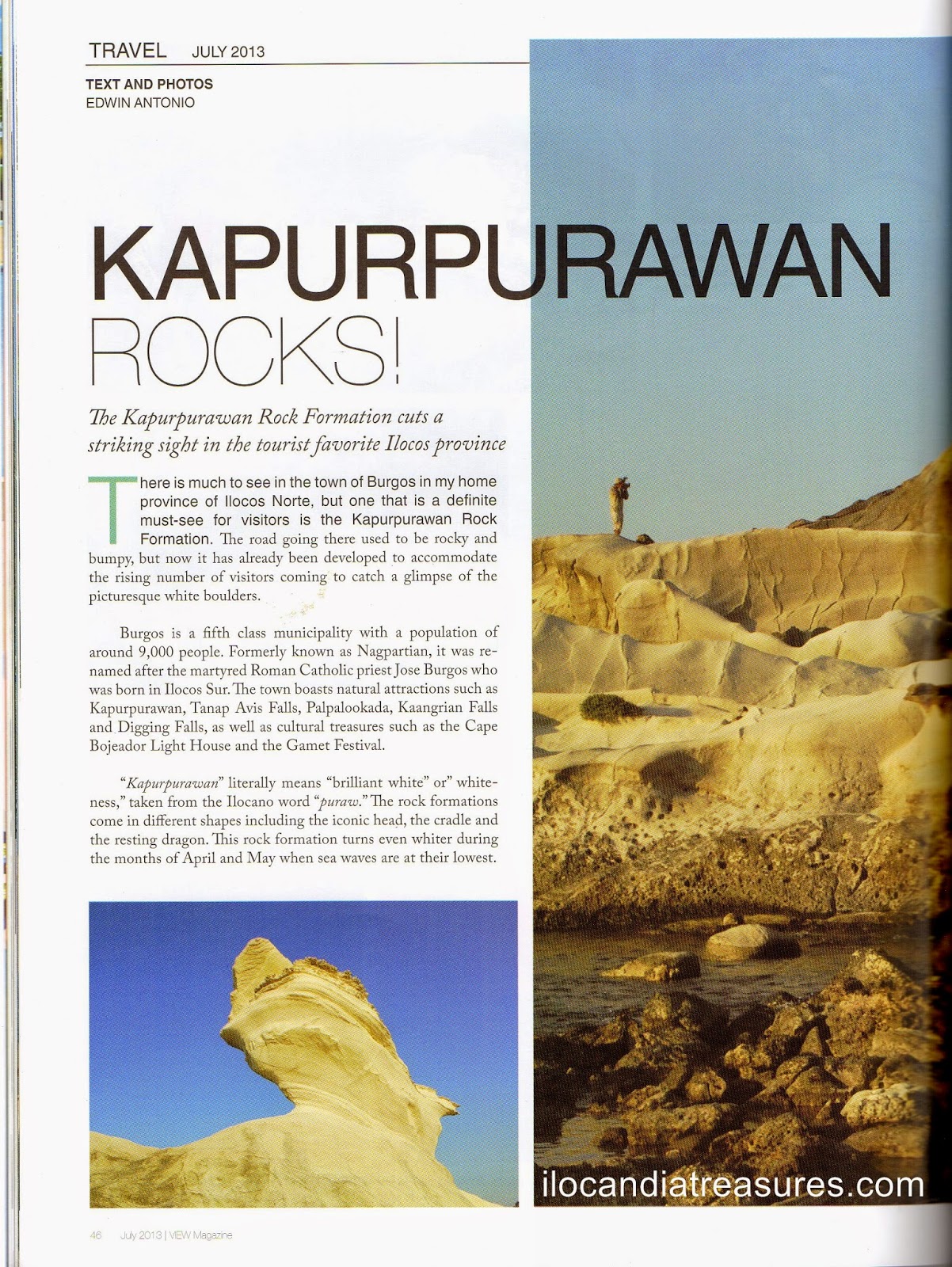 Apart from admiring the rock formation, some go fishing here. Opportunities for swimming might be limited because the place is rocky. You can also explore some caves in the area, but be sure to spring for a guide to show you around.
The Ilocos Norte provincial government has developed the area, and included in its “Paoay Kuamakaway” promotions. Since then, there has seen an increase in the number of tourists visiting the area. The local tourism office has restricted entry to some parts of the rock formations to deter vandalism and to protect the rocks from further erosion. Poblacion barangay captain Joegi Jimenez revealed that a number of table-like rock formations in the place were destroyed during recent typhoons.

The site of Kapurpurawan used to be hidden from he public, so there were few tourists who got to see it. It was not until Jimenez worked in government that the rock formation was promoted as a destination and eventually gained prominence in media. 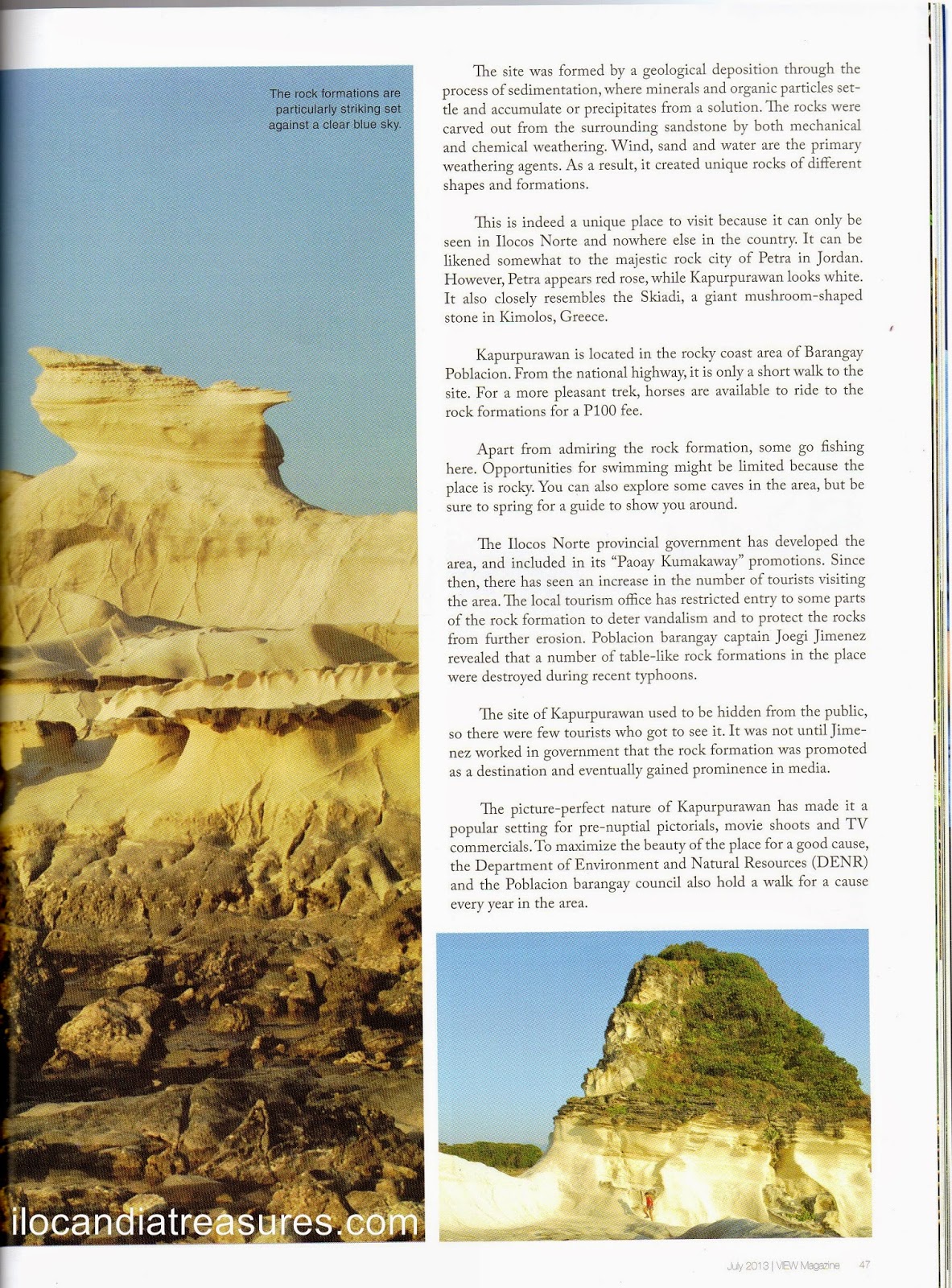 The picture-perfect nature of Kapurpurawan has made it a popular setting for pre-nuptial pictorials, movies shoots and TV commercials. To maximize the beauty of the place for a good cause, the Department of Environment & Natural Resources (DENR) and the Poblacion barangay council also hold a walk for a cause every year in the area.


Like many destinations in the country, stories and superstitions are told from generation to generation. Old folks forbid young people to go to the place because they believe that spirits roam around the area.

At present, people see the rock formation as resembling a lovebird, dove or boat, and it’s still the same form since I first saw it. Indeed, it looks out of this world in many pictures.

This natural wonder is indeed a work of art. It is simply breathtaking. Every time I go there for a look, I feel relaxed, all the stress that I feel washed away by seeing the view of the stones and the vast ocean beyond. 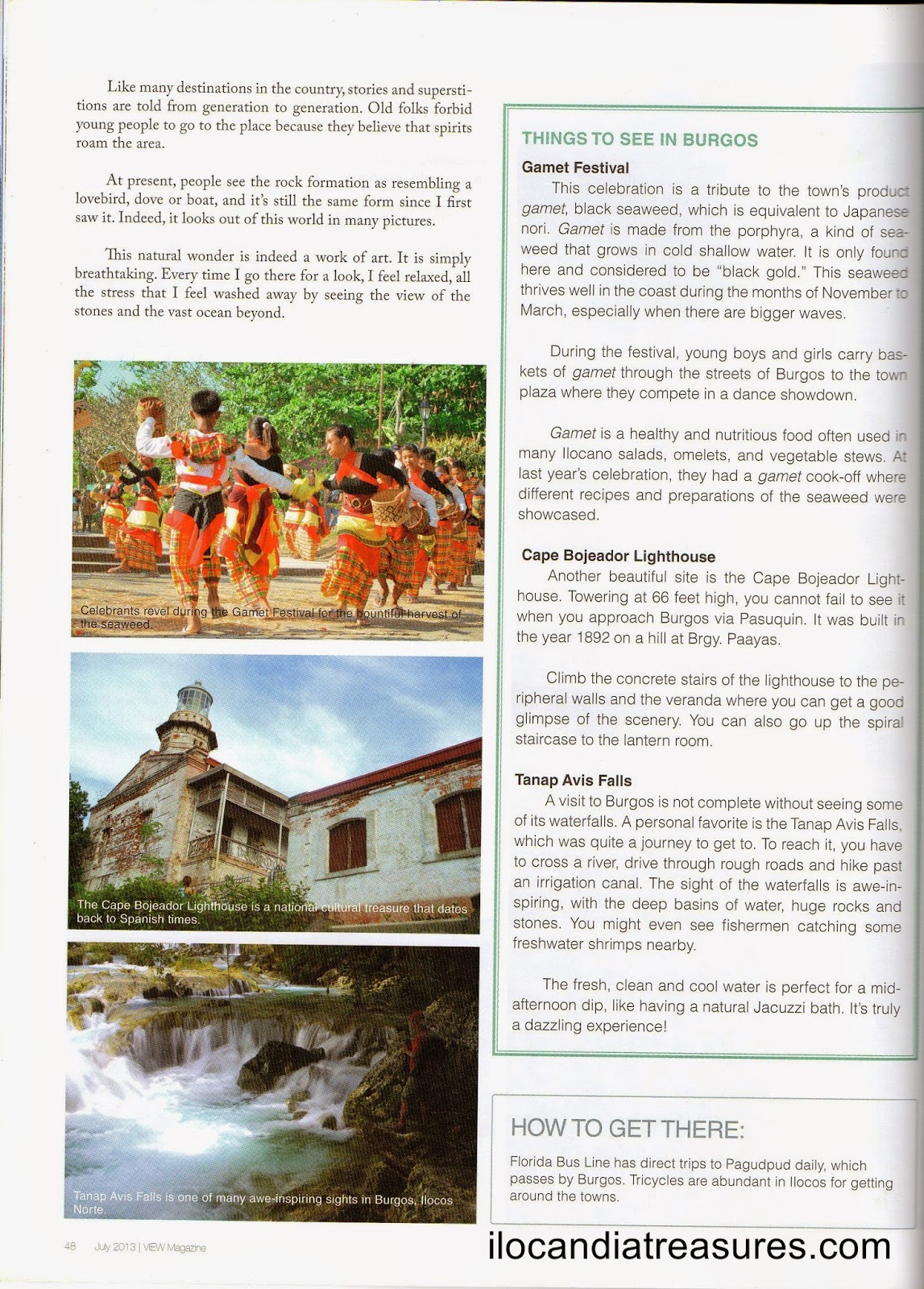 THINGS TO SEE IN BURGOS

This celebration is a tribute to the town’s product gamet, black seaweed, which is equivalent to Japanese nori. Gamet is made from the porphyra, a kind of seaweed that grows in cold shallow water It is only found here and considered to be “black gold.” This seaweed thrives well in the coast during the moths of November to March especially when there are bigger waves.

During the festival, young boys and girls carry baskets of gamet through the streets of Burgos to the town plaza where they compete in a dance showdown.

Gamet is a healthy and nutritious food often used in many Ilocano salads, omelets, and vegetable stews. At last year’s celebration, they had a gamet cook-off where different recipes and preparations of the seaweed were showcased.

Another beautiful site is the Cape Bojeador Lighthouse towering at 66 feet high, you cannot fail to see it when you approach Burgos via Pasuquin. It was built in the year 1892 situated on a hill at Brgy. Paayas.

Climb the concrete stairs of the lighthouse to the peripheral walls and the veranda where you can get a good glimpse of the scenery. You can also go up the spiral staircase to the lantern room.

A visit to Burgos is not complete without seeing some of its waterfalls. A personal favorite is the Tanap Avis Falls, which was quite a journey to get to. To reach it, you have to cross a river, drive through rough roads and hike past an irrigation canal. The sight of the waterfalls is always awe-inspiring, with the deep basins of water, huge rocks and stones. You might even see fishermen catching some freshwater shrimps nearby.

The fresh, clean and cool water is perfect for a mid-afternoon dip, like having a natural Jacuzzi bath. It’s truly a dazzling experience!
Posted by Edwin Antonio at 6:03 AM