2012: A Year of Great Cultural Events

The year 2012 is called year of the water dragon. It is really a year of new beginnings and mixed blessings. Truly great blessings came this year with so much cultural work accomplished. It is a new beginning of more enjoyable events. When someone is passionate about something, it’s undeniably fulfilling. 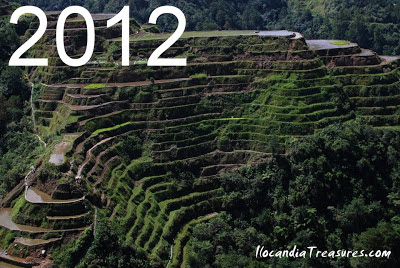 It’s been a while that I have been covering festivals and other celebrations in the country on my own. This year invitations came to me one by one to judge the different colorful street pageantries and dance showdowns of town fiestas. It started in Ilocos Norte where I am regularly invited to the Gameng Festival of Solsona then Pamulinawen of Laoag City, Guling-guling of Paoay and the Damili of San Nicolas and up north to our neighbor Cagayan Valley, Sambali Festival of Piat.

Invitations also came as far as Zamboanga City in Mindanao for the Hermosa Festival and the Helubong Festival and Mutya ng Lake Sebu in South Cotabato. I also witnessed the Parada ng Lechon in Batangas, T’nalak Festival in Koronadal, Kamahardikaan in Tawi-tawi, Peñafrancia of Naga, Kadayawan and Eidl Fitr of Davao, La Milagrosa of Ilocos Norte, Gotad Ad of Kiangan Ifugao, Tadek of Nueva Era, and Buyboy of La Union.

While enjoying the said festivals, I had the opportunity to visit and see wonderful sites such as the Banaue rice terraces of Ifugao, Callao Caves in Cagayan and the Miagao Church in Iloilo. I had great fun in discovering for the first time the notorious lands of Sulu, Tawi-tawi and Basilan. They said that it’s dangerous to be visiting these places but I found them quiet and safe as per my experience. Most people get paranoid over security of visitors especially in Sulu where I paid a courtesy call to the municipal officials of Indanan and they gave me police escorts. Strange experience really however it turned out so well.

Aside from my local trips, I traveled to Guam spending the New Year’s Eve with family friends and went back on August in transit to Saipan. I had cultural encounter with the indigenous peoples Carolinian and Chamoro in a native village. I got to watch hilltribe and other underprivileged children perform and participate in the “For Hopeful Children Project” in Thailand.

It was a loaded work at the National Commission for Culture and the Arts full of activities and events where we started with strategic planning in Davao with all my colleagues from the subcommission on cultural communities. I attended the ASEAN weavers’ forum in Ilocos, Ani ng Dangal Awards in Malacanang, Dungog Kabataan in Capiz, National Advisory Meeting & Dayaw Presscon and Exhibit at the office and our committee meeting in South Cotabato.

I got invited as a resource speaker for the TMI Literary Convention in San Fernando, and project proposal writeshops in LGU Dagupan, MMSU in Laoag, DepED in Piat Cagayan, and provided Technical Assistance to Santol La Union amd Suyo Ilocos Norte Bago School of Traditions.

I was also invited to speak in the Gamet Festival celebration in Burgos, BIBAK-Bago Induction Program in La Union, Capability building seminar Pagtitipon in Norzagaray in Bulacan, MMSU Sociology Forum and ASEAN Cross-cultural understanding Promotion for the SSEAYP delegates on their pre-departure training.

The highlight of the year of course was the Dayaw Festival held in Bulacan. We were able to organize and implement it a bit late because of the delay of preparations and release of funds. I brought a delegation of ten people composed of cultural performers and masters to the said event. I brought folk dancers and tamboreros from the Ilocos Norte National High School and Bago delegates from La Union. I also sent four youth delegates to the Dungog Kabataan in Roxas City prior to Dayaw.

The biggest accomplishment I could say on my cultural work is to put up a capability building project called Kannawidan ti Amianan: A Cultural Exchange and A Tribute to Living Treasures held at the Robinsons Mall in Ilocos. The various cultural groups including the indigenous cultural communities of Ilocos Norte participated upon my invitation. These are Carasi, Dumalneg and Nueva Era. Mayor Pagdilao and officials of Pinili town graced the show and accepted the plaque of recognition for National Living Treasure Magdalena Gamayo. The daughter of National Living Treasure Teofilo Garcia accepted her father’s plaque of recognition. She was escorted by some provincial government staff of Abra. Cultural masters and other local living treasures were also given the recognition. This project was in partnership with Mayor Alfredo Valdez and the municipality of San Nicolas.

In my work at our alumni organization SSEAYP International Philippines we were inducted into office by no less than the Philippine Vice President Jejomar Binay at the Coconut Palace. Later we made courtesy call to the Deputy Chief of Mission of the Japan Embassy and made courtesy calls to embassies of Singapore, Indonesia and ASEAN Affairs office with the SSEAYP delegation.

For my photography hobby, we were invited to conduct photography lecture and safari for doctors from Manila at the Sitito Remedios in Currimao then I was invited by them to join their Larong Pinoy Shoot in Quezon City. We conducted Pecha Kucha Night almost monthly for a year at the Samtoy Bookshop.

I launched and implemented Kids on Project Photography to Pag-Amoma Children’s Place in Davao, SOS Children’s Village in Iloilo, Subic Bay Children’s Home in Olongapo City and was able to take the kids of Pag-amoma to shoot Kadayawan Festival. Of course as icing to the cake, I emerged as favorite winner in the ASEAN Photo Competition.

Lastly, to cap my various activities, I participated to some charity works such as the read-along, book donation and feeding program to the day care centers of Pateros and to the Missionaries of Charity in Manila. A very good project conducted annually since 1991 is the “For Hopeful Children Project” which I became the head of delegation. I brought three volunteer children and we had fun joining the project.
Posted by Edwin Antonio at 7:46 AM

Truly impressed! Each and every factor is very, truly clear and open. You've got shared lots of advantageous particulars.
link for FCF FamilyCare