Bulacan gears up for Dayaw 2012

A grand celebration of the indigenous cultures called Dayaw 2012 will be held in Malolos, Bulacan on November 27-29, 2012. It is an annual celebration conducted under the auspices of the National Commission for Culture and the Arts. 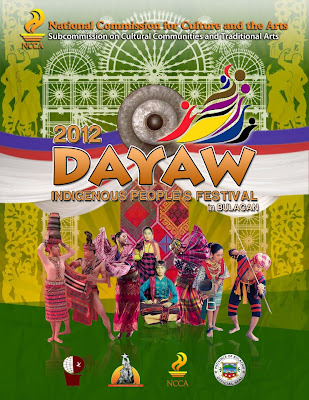 It will be a showcase of cultural performances, rituals, traditional games, fora, arts and crafts exhibit, traditional cuisine demonstrations and cultural tours. With the celebration’s theme “Katutubong Pamumuhay, Halawan ng Aral sa Buhay” (Indigenous way of life, source of lessons in life), a total of 45 cultural or indigenous communities will converge and highlight the importance and richness of the indigenous cultures.

Dayaw celebrates the cultural richness of the country through its indigenous peoples. It is hoped that the festival will foster a deep appreciation of their contributions.
Posted by Edwin Antonio at 4:00 PM