After attending a workshop in Davao last February, I was able to visit the House of Congress at Batasan Pambansa in Quezon City. I went straight to congress from the airport.
My primary purpose was to meet up with Congressman Emannuel Pacquiao. I have set an appointment with him through his office. But it was not accommodated since there was a long queue of guests and visitors. There were also people who want to have a photo with him. His staff has to make another schedule. 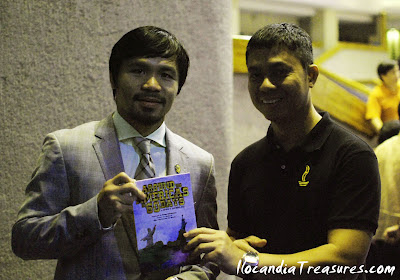 I got upset since I have to return to the congress. Fortunately, my good friend Marites who works at the house was able to accompany me and made a way for me to see him. She just took me to the session hall and there I talked to him about a project proposal. It was a short but a meaningful talk.

Representative Manny Pacquiao of the lone district of Sarangani is popularly known as Pacman in the boxing arena. He is sometimes called Mexicutioner because he beats all the Mexicans he was matched to in the boxing ring. He is the first eight-division world champion, having won six world titles and was named Fighter of the Decade. Aside from boxing, he has engaged also into acting, music recording and politics. 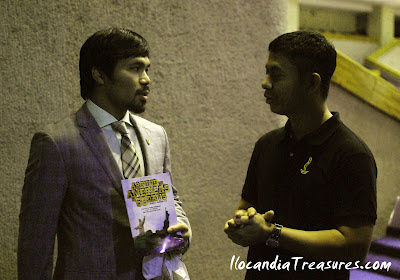 Lastly, I got the chance to give him a copy of my book Around the Americas in 60 Days as token of my appreciation for his time. I even told him that he was mentioned in the book because he is indeed so popular in Mexico. I related to him that when I went visited Mexico and found out that I am Filipino, they would happily say Pacquiao. After our conversation he has to go for his child’s birthday so when he walked to the hallway, he browsed the book and looks so eager to find the section where he was mentioned.
Posted by Edwin Antonio at 12:01 AM