I was able to visit the UNESCO World Heritage Miag-ao Church on a second time because of a meeting with National Commission for Culture and the Arts (NCCA). I went ahead to go around town before the meeting and it was perfect time to see this world class church. 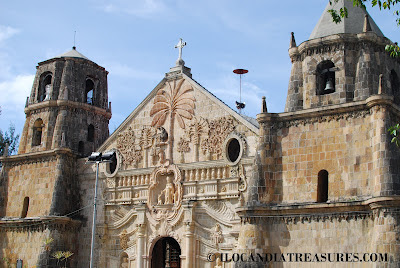 The said church is located in the town of Miagao. It is a 1st class municipality of Iloilo and it is 40 km away from Iloilo City. Buses or jeepneys or even taxi are available transportation going there. I could not believe that it’s the largest municipality in the country with a total of 119 barangays. 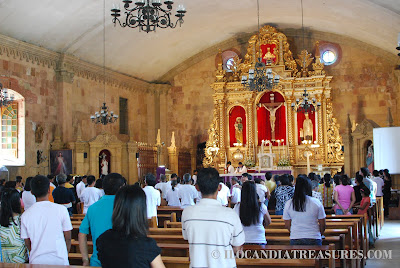 This is one of the Barouque Churches of the Philippines built in 1786 by the Spanish Augustinian missionaries. It is made up of two watchtower bellfries on its bilateral sides which serve to monitor and to defend the people from the attacts of the Moros. It has thick walls and reportedly to have secret passages. This is sometimes referred to as the Miag-ao Fortress Church.

The bas-relief façade is composed of a central feature, a big coconut tree which represents as the tree of life. There are other smaller trees present. The church represents the unique blend of Spanish and native influences.
Posted by Edwin Antonio at 7:41 AM 0 comments

A Showcase of Kabigan Falls

A good friend of mine Atchee Atsuko of Japan came to Ilocos Norte on an instant plan. She came by on a funny reason saying that she heard from the sun that she has to come to the Philippines. I told her that it was so co-incidental that Laoag is called Sunshine City because of the term meaning bright or light. 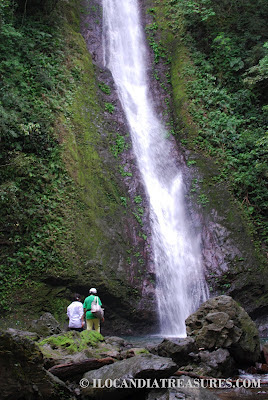 She stayed for three days. I brought her to Kabigan Falls in Pagudpud where she requested to visit a waterfalls. She enjoyed so much since she wanted to commune with nature. We trekked from the highway going there for about half an hour. A guide is always available for 100 pesos minimum fee. It was good that we got the lady guide who can communicate well. 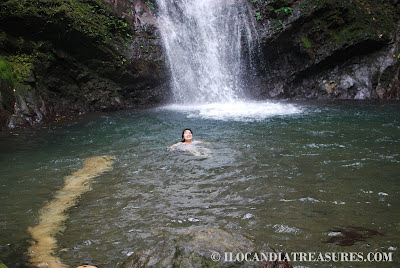 We walked in the bushes, ricefields, under the tall trees and thick foliage, and crossed foot bridges. She really enjoyed every minute of walking. She even saw a carabao, huts , and people doing crafts. 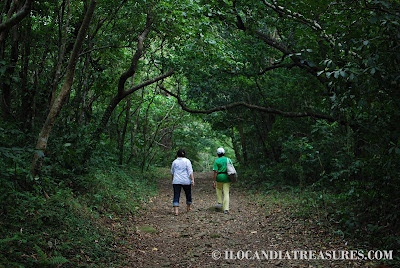 The said waterfalls is located in Brgy Balaoi and its 1.8km from the highway. It’s a beautiful falls with a concave basin that visitors can take dip into after a 30 minute trekking. My Japanese friend really managed to take a swim and got so refreshed and we took each fresh buko juice after returning near the highway. 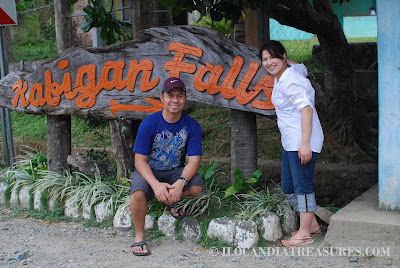 Posted by Edwin Antonio at 7:55 AM 0 comments

It was co-incidental that coming from Baguio City, I saw an event in San Fernando City about to happen. I dropped by and witnessed this Buyboy Festival. 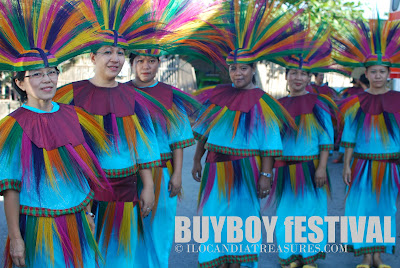 La Union is located in the Ilocos Region. Its name means The Union or The Unity in Spanish. This was formed in 1850 when Spanish Governor-General Antonio Maria Blanco merged some of the towns of the provinces of Pangasinan, Benguet and Ilocos Sur. There are 19 municipalities and 1 city. 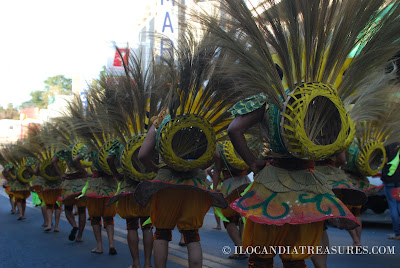 The province produced primarily buyboy, walis tambo or brooms. So they came up with the idea of celebrating Buyboy Festival in celebration of the 162nd founding anniversary of the said province. 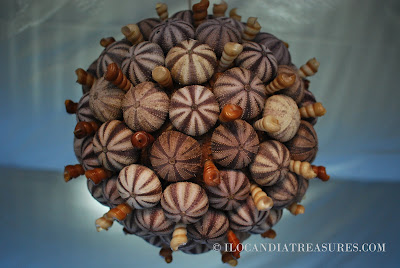 All women were the participans in the dance parade. This was the first time that I saw no gays in the contingents. It is because this is under the auspices of the La Union Vibrant Women, Inc. (LUVWI). Young and senior citizens paraded in their colorful costumes accentuated by buyboy and their graceful dance steps. 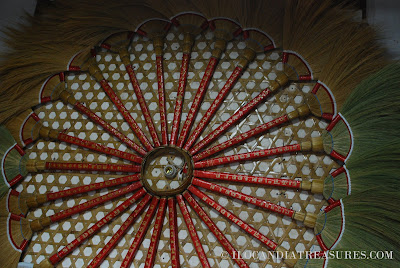 At the plaza were stalls for the trade exhibit of the various municipalities of the province. I have seen several products on sale. There were abel fabrics, wooden crafts, farm produce and many others. I have seen sea urchins on sale from the Balaoan booth. It has some shell decorations. I have tried basi offered by one of the exhibitors. 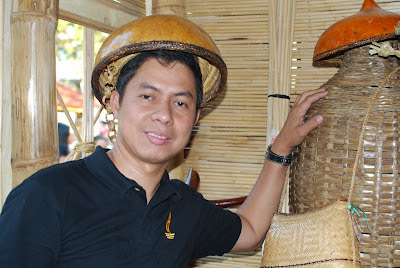 Of course, the booth of San Fernando City showcased the buyboy where it was decorated with the same. They sell buyboy. I have tried also the kattukong, a hat made from gourd.

The showdown of the contingents was held in the evening which I did not have the chance to witness for I have to go back to Laoag.
Posted by Edwin Antonio at 12:01 AM 0 comments

An Easy Side-trip to La Trinidad

After conducting a meeting in Baguio City, my colleagues from the National Commission for Culture and the Arts decided to visit the town of La Trinidad. It is famous for its strawberry farm and the trading post. 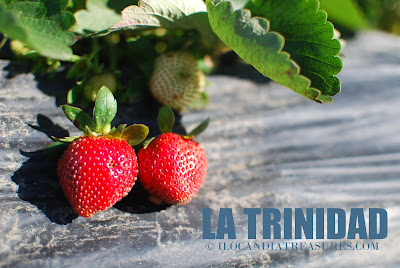 The said town is a first class municipality and the capital of Benguet. It was founded in 1950 and it has 16 barangays. It has a land area of 82.74 sq. km. We were taken to this town through the courtesy of our friend Brian Camhit. It was an easy trip because of the use of his car. 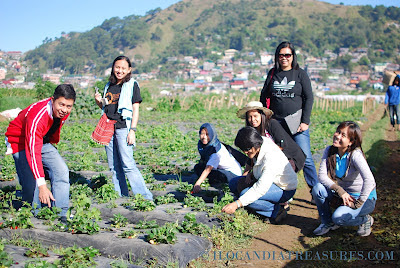 We went to see first the strawberry farm where we have seen the plants on the plot. Its white flower and the green young fruit can be seen in the plots and the very prominent are the red strawberry fruits. If one opted to go picking strawberries then a kilo of harvest would cost around Php300 while half the price for ready-packed strawberries. One can also try samples from the bilaos. 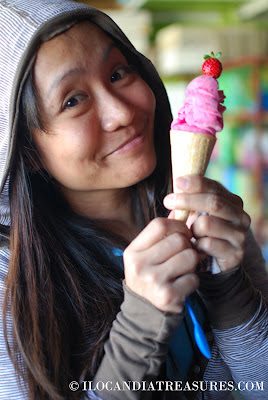 The town is a holder of a Guiness Book of World Record for baking the world’s largest strawberry cake in 2004. Aside from cake, strawberry cake and taho are popular by products which my friends have tried. 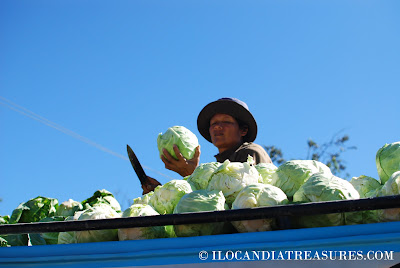 Trading post at the back of the town hall sells very cheap vegetables. My companions really ordered bulk of vegetables to bring to Manila. I have seen here several trucks delivering their vegetables, so fresh and yet so cheap in prices. I was able to taste a different variety of banana called danogen. Its only 2 pesos for a large size banana. It tastes really good but this is not so good for cooking..
Posted by Edwin Antonio at 7:38 AM 0 comments