Together with my partners from The Ilocandia Photographic Society (TIPS), we went on a weekend shoot to the town of Burgos. This is a town with beautiful tourist spots and rich with natural resources. 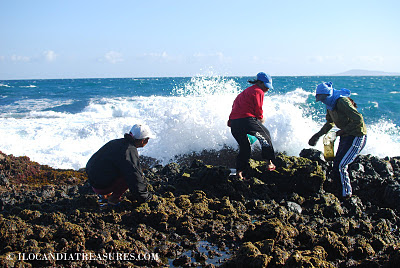 One of its pride is the gamet, black seaweed that grows on the rocks of the seawater. This is painstakingly taken out of the rocks which usually comes slimy The gamet pickers are required to wear hand gloves made of net or sock to take it out.

We visited the village of Saoit where we went straight to the shore. We saw incredible varied coral rock formations. They come mostly in blackish color. We have to step on sharp pointed rocks that would look like stalagmites. 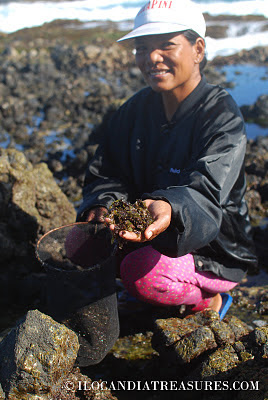 We chanced upon two groups gathering gamet, a couple team with Tata Bartolome and his wife and another team mother Manang Zenaida with her daughter. They looked earnestly collecting the seaweed. They each have a collecting basket made of net. They were so accommodating to explain the conditions of gamet picking. The seawater was calm so they have thin gamet to pick.

According to them, the best time to collect is when there are big waves and if it’s drizzling to get a thick and blackish gamet. Many people come along to pick during those times. They stand on the edges of sharp rock formations and they have to run before they are being struck by the waves. Palong is their local term for waves. So it’s also a risky job to pick seaweeds because they sustain injuries and bruises. There were even deadly accidents. 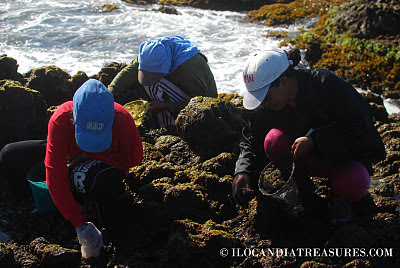 After the gathering, they have to flatten the seaweed and dry it under the sun. This Ilocandia nori is also expensive in the market because of the difficulty in gathering and its considered as black gold of Burgos.

Gamet can be eaten straight if it’s freshly picked. I have tried it from the site and it tastes good. But if it’s dried one, this can be fried, mix in an omelette, or in inabraw or vegetable stew.
Posted by Edwin Antonio at 4:54 AM

I want to go in ilocos, I never been there .

You are welcome to Ilocos. Please drop by to see the beauty of the region.