The month of October is declared as National Indigenous Peoples’ Month as per Presidential Proclamation 1906. In celebration of this, the National Commission for Culture and the Arts is sponsoring a festival celebraton called Dayaw 2011. It is under the auspices of the Subcommission on Cultural Communities and Traditional Arts (SCCTA) and Mindanawon Foundation. 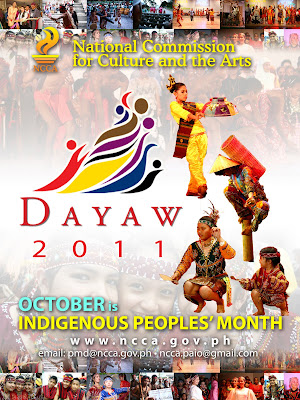 This festival aims to celebrate the richness of the cultures of the Filipino people and to strengthen the awareness, appreciation and pride of all Filipinos of our own traditional culture. It has this year’s theme: “Paghabi ng Ating Pagkakatulad Tungo sa Kapayapaan”. Various activities will be conducted such as rituals and performances, food festival, forum, arts and crafts exhibit and traditional games. It will be held on October 6-10, 2011 at the Energy Park in Tagum City, Davao Del Norte.
Posted by Edwin Antonio at 8:26 AM

Very native and traditional.. Every people should give importance to this very beautiful tradition that only here in the Philippines you can see.

you are right. native is beautiful. thanks for your comment.