It was two days before the festival when I decided to go. My friend Maricel Faller invited me last year but I did not make it because I went to China. So this year, I messaged her that I am going but she was not coming since she is based in Brunei. She endorsed me to her mom Mrs Rosy Babista and hosted my visit to Lucban. 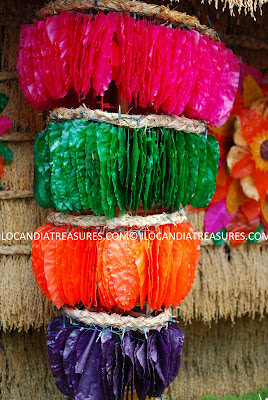 It was a four-hour ride from Quezon City to Quezon Province. I alighted in Lucena City and took a jeepney for P30 fare going to Lucban. It was a 30 minute ride and I can sense the cool breeze. It was already 7pm when I arrived in town. It was 12 years ago when I first visited this town and witnessed the said festival. Pahiyas is a colorful festival celebrated in honor of San Isidro Labrador every 15th day of May where each house is being adorned by colored rice wafers called kiping, vegetables, fruits and handicrafts. The term comes from hiyas means jewel or pahiyas means precious offering. This is an ancient farmers’ festival that dates back in the 16th century. There was also a legend that says that whenever San Isidro Labrador went out of the church, he magically plowed the rice field. It is a story that was passed on to us from Mexico during the colonial age by the Spaniards. 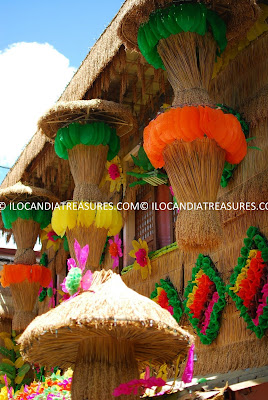 I went first to try the pansit habhab because I missed this one. But I was not lucky because they placed it on a saucer. Its chami the thicker noodles. I was not contented so I tried one more in another store, so they gave me pansit in a banana leaf and ate it by mouth, thus they call it habhab. It’s so cheap at 10 pesos. Then I took my dinner of rice and Lucban longaniza. It was really a food trip at once. 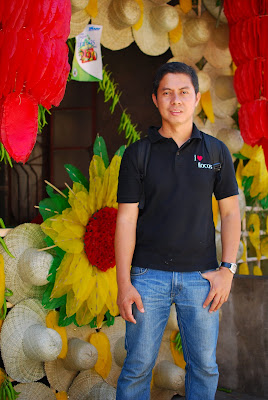 Everyone is busy decorating their houses with kiping, vegetables, fruits and other indigenous materials. Some have to use ladders to reach the windows and ceilings to put in their decors. It was the eve of the festival but already on a festive mood. Some houses were already done added with some lightings and tourists cant help but to pose in front for photographs. There was a concert going on at the park and it was jampacked with young audiences. I enjoyed for a moment the sound of music. Then I went to the Babista house to get a good rest. 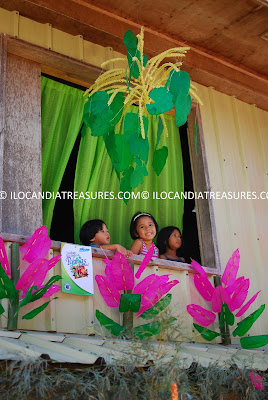 In the morning, Tita Rosy prepared breakfast composed of hardinera, fried embutido, dinuguan and suman. Wow it was a good breakfast. She even wrapped embudito and suman for me to take home. 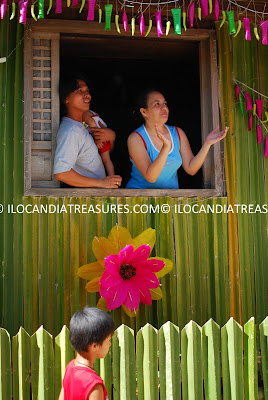 I visited the church first thing then went to the Pahiyas route to find the procession and I was lucky to see it near its end. I saw the image of San Isidro Labrador who is the patron saint for bountiful harvest. Just right after the procession passed through there was an old man at his house’s balcony who threw away money composed of coins and paper bills and other stuff such as slippers, playing cards and candies to an electrified crowd and scramble for them. I was taking pictures but can’t help and join them grab for the prizes. I was lucky to catch a pair of slippers which Im in dire need to alternate my shoes when traveling. I was able to grab also some coins, paper bill and candies. It was really fun to have that grab fest. 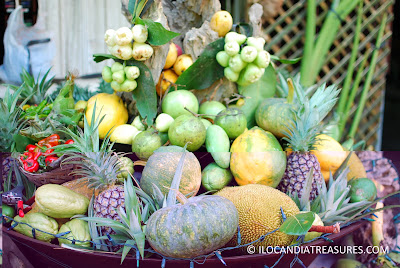 My time is running so after having my prizes I went to phtograph the decorations in the houses along the Pahiyas route. It was so colorful to see the differenct colored kipings. There was green, red, yellow, pink, violet, and orange. I saw one big wok of fruits and vegetables displayed in one of the houses. Rice are also used to decorate the houses. 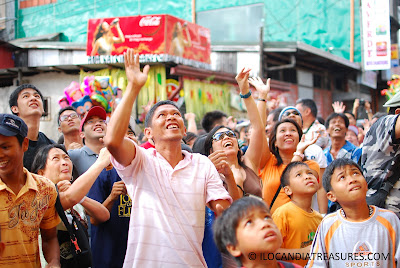 I rushed to the Kamay ni Hesus statue and walked up the more than 100 steps. It was so hot and I profusely perspired. Then in the afternoon I saw the parade of beautiful muses of Lucban clad in a gown designed and made from indigenous materials. I saw the floats and the higantes. After the event, I rushed to go to Santa Cruz terminal and paid 40 pesos as fare. It is a shorter route to take going Manila. I have to catch up with another bus trip going back to Laoag.
Posted by Edwin Antonio at 11:19 PM