One of the popular landmarks of Laoag City is the sinking bell tower. It is one of the top tourist attractions in the province of Ilocos Norte.
They say that it is sinking because a person on horseback ride is able to enter doors of the tower in the old days but now a person has to stoop to get through the entrance. The structure is so heavy and it was built on a soft sandy foundations. 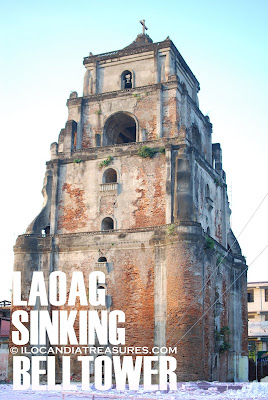 This massive structure of 45-meter high (150 feet) was built in 1612 by the Augustinians. This belfry is far separated from St. William’s Cathedral with a distance of approximately 85 meters.

This belfry is still functional. They rang the bells in special occasions. It is lighted at every night. Tourists are allowed to enter it upon request. I have tried once to go inside and get to its top. One can see the picturesque and lovely view of the city especially the bridge and the river.

I am worried because demolition of buildings on its periphery was on going. What could be its future in the midst of these demolitions and putting up new business establishments. I hope they would protect and preserve it. I have seen its back view and it’s much more beautiful with its exposed old red bricks sans the cables. It is more exposed now so I hope they could just set up a park around it to give it a breathing space.
Posted by Edwin Antonio at 2:53 AM