A Visit to the Hill Tribes of Northern Thailand

After coming from Donxao, we proceeded to Mae Sai, the border of Thailand and Myanmar. Some of the Westerners from our group attempted to enter Myanmar and our tour guide insisted that they don’t have to do it since it would be difficult because of many questions asked by the immigration. Only one of them successfully did it. 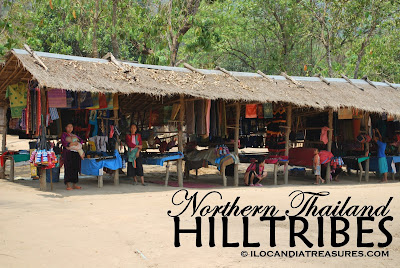 Later, we went to visit the hilltribes. This is a term used to describe the various tribal people who migrated from China and Tibet over the past centuries. They inhabited Northern Thailand especially Chiang Rai and Chiang Mai because of its thick forests and mountainous terrains that make them subsistence farmers and use slash and burn farming techniques.

There are actually six groups of hilltribes in Northern Thailand namely: Akha, Karen,Lahu, Hmong or Miao, Mien or Yao and Lisu. I am quite fascinated with these indigenous people because they wore colorful costumes and they live a simple life. They speak distinct language and with rich culture. 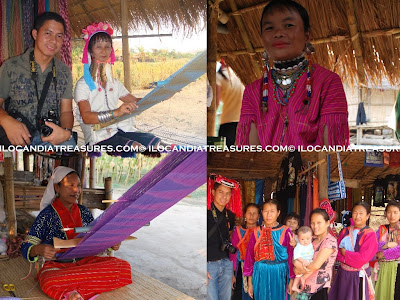 From the cultural community of Karen group, it was fun to be interviewing them. Though it’s difficult to communicate with them because of language barrier, they know a little English, sign language also helped. I asked also our guide to translate some questions for them.

They are situated in a village where they put up stalls to sell souvenir items. They do loom weaving to produce fabric and they make bags and other items out of it. Various handicrafts were on display for sale. Their group is being supported by the Thai government. Although its Buddhist nation, majority of these cultural communities practice Christianity religion. 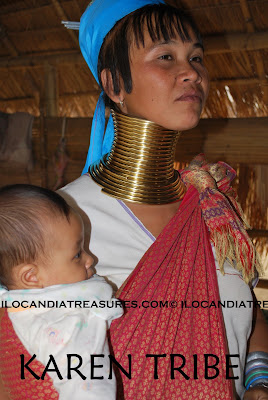 Karen people are originally from Burma who speaks Sino-Tibetan language. They make up 7 percent of the total Burmese population. A large number can also be found in Northern Thailand. They don’t want to be called Karen since it means primitive people but now the term is not being called that way. There are subgroups of these people such as the Red Karen, White Karen, S’gaw Karen, Pwo Karen, and Paku Karen. The people with neck rings or so called long necks belong to Padaung under the subgroup Red Karen or Karenni. Kayan Lahwi or Long Necked Karen or Giraffe Neck Women.

Brass coil is placed in the neck of women who started to wear it since they were five years old. Each coil is replaced with a longer one as they grow old. The weight of the brass pushes down the collar bone and compresses the rib cage that made the neck looks longer. The neck is never lengthened as what they popular say.

The hypothesis made by anthropologists with this culture of Karen is that the rings protected the women from becoming slaves because they become less attractive to other tribes. But according to our guide, he said that wearing the ring is their cultural identity being associated with beauty. 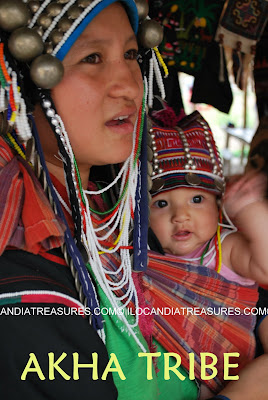 Akha group is one of the dominant cultural influences in the area and closely related to the Hani of Yunnan province of China. They wear nice head gear whether a baby or an old person. Old people from this group believe in shamanism where Goddess spins the universe and other beliefs on spiritual world. The group gives emphasis on genealogy where they teach their children early of the family history and particular about honoring their ancestors and parents. 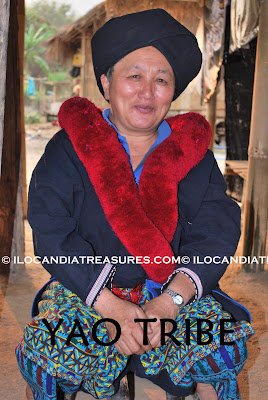 Yao nationality is a group of people who cover their head with a black or red scarf. They substitute this also with a turban that can go in different forms. They are one of the minorities in China who migrated to Thailand, Vietnam and Laos in the early 19th century because their lands were taken and also for the reason of opium trade. They have a typical house that is rectangular in shape made of bamboo and wood. Yao is also called Mien Hill Tribe who had a written language long before unlike other tribes. They are considered to be the businessmen among the hill tribes. 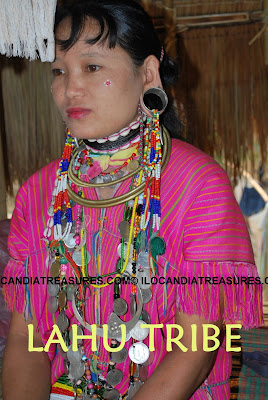 Lahu people have originated from Southwest China and they have big ears. Its alternate names are Ladhulsi and Kawzhawd. It has also its subgroups namely: Red, White, Black, Yellow and Shehleh Lahu. It refers to the color of their costumes. They practice animism, Budhism and Christianity. Lahu women are skilled in back-strap and foot-treadle loom weaving cloth. 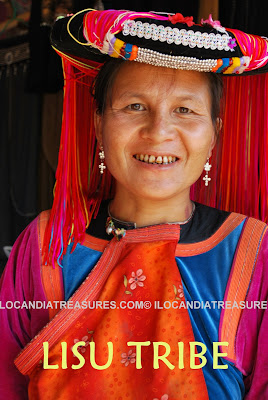 Lisu group is a Tibeto-Burman ethnic group who inhabit the mountain areas of Burma, China, India and Thailand. They originated from eastern Tibet and they are composed of 58 different clans. The most popular subgroup is the Flowery Lisu of Thailand. Lisu women wear brightly colored dresses. They wear multi-colored knee-length tunics of red, blue or green with a wide black belt and blue or black pants. Sleeve shoulders and cuffs are also decorated with a dense applique of narrow horizontal bands of blue, red and yellow.
This is the video of the Long Necked Karen people.

Hmong hill tribe is also called Meo that belongs to the group Miao ethnicity of Southern China. The people make houses that sit right on the ground and live there, not on stilts as do most on the other tribes. These indigenous people are diligent, patient, and independent people, fond of wearing their silver ornaments during ceremonies. They are much devoted to the sky spirit. They practice a strict male-female division of labor even more than the other tribes. One custom that especially illustrates this custom is that of giving a newborn boy a gift of metal from which he will one day forge a weapon, while the newborn girls receive no special gift.
This is the video of the hilltribes Akha and Lahu.
Posted by Edwin Antonio at 11:10 PM