An Elephant Safari in Thailand

On the following day after our visit to the Golden Triangle and the hilltribes in Chiang Rai, I went on a group tour back in Chiang Mai to an orchid and butterfly farm where I saw lovely butterflies flying and touching the flowers in the garden and they were fed with pineapple pulp. We had a short lecture on how to grow orchids in a bottle. 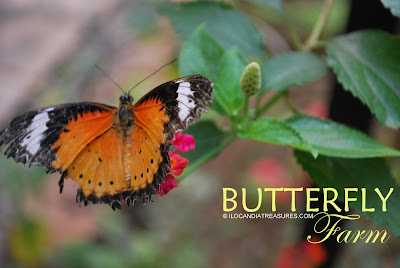 Then we proceeded to the Maetang Elephant Park where we got an oxcart ride initially going on a short distance. We then trekked the area to see and get close to the elephants. I saw them bathe in the river where their handlers let them plunge into the water on their side and turn around while they were being brushed by their caretaker. These elephants even played with water splashing from their proboscis or trunk. 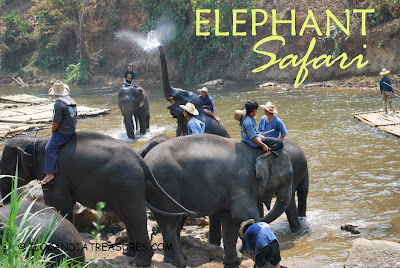 Elephants are the largest land mammals living today. There are three different types of elephants namely: African bush elephant, African forest elephant and the Asian elephant. They have a gestation period of 22 months which is very long. It’s nearly two years in the making. An elephant may live up to 50 to 70 years old. Elephants are symbol of wisdom especially in Asian cultures and they are popular for their memory and intelligence. 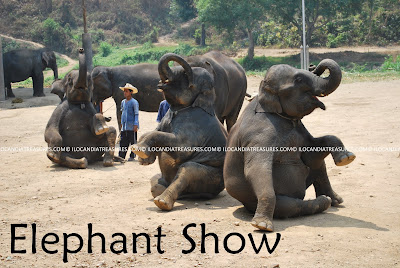 Elephant’s level of intelligence is similar or equal to that of a dolphin or other primates. I had confirmed this wit and mind of this mammal when we were treated to an elephant show in the park. Around five elephants paraded and entered to the show area. They made various formations, they danced to a disco music, they played football, and one elephant was tasked to draw. I was really amazed to see them perform these various tasks. 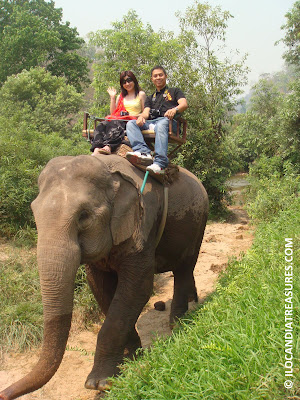 I had also had an elephant ride around the park passing through the lush of the forest, along the local villages and have crossed rivers. I shared a ride with one lady from Hongkong. We rode an elephant that is 45 years old. One elephant calf even went with the mother elephant and played in the water when we crossed the river. 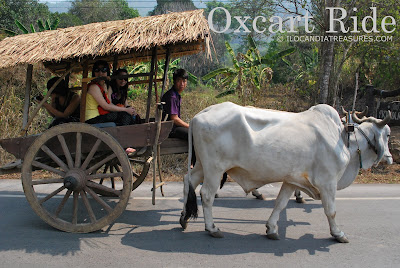 Then we had a bamboo raft cruise along the river for one hour. There were some ambulant vendors who sell bottleds in the river.

Finally we visited a resort with a waterfalls. I was accidentally left there by my group because I was engrossed of the falls. Luckily one tour vehicle hitched me and took me to downtown.

This was really an amazing trip I made in Northern Thailand. There were so much of discoveries.

This is the video entitled Elephant Safari.

This is the video on the tricks and skills of an elephant entitled Elephant Show.