With the climb we had to Kibungan range, I was able to witness the rice harvest in the province of Benguet. They call it ani in the local dialect. It is harvesting the ripe palay. The rice stalks are cut one by one and then the harvested palay are measured by the bundle or they call it tan-ay. 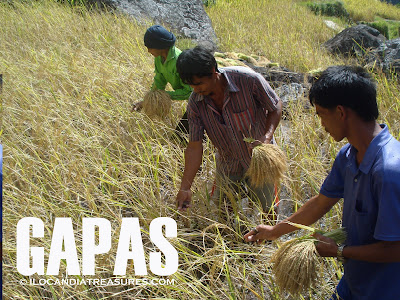 It is a unique and traditional way of harvesting rice by the folks of Kibungan. I saw two men and an old woman who do the harvest. They do it manually with their hands and the use of a rakem. The procedure is called gapas.

It was my first time to see this type of harvest. After the cut, they tie the rice stalks in a bundle and dry in under the sun by placing on top of the rocks. 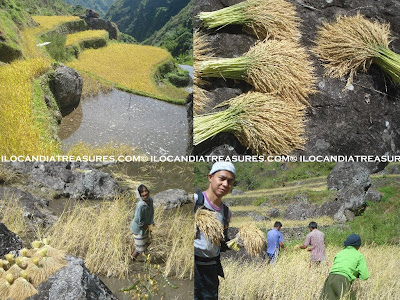 Rice is the principal crop planted in the rice terraces along the mountain slopes of Benguet province. They have two cropping seasons, July to August and harvested in December to January and March to April which is harvested in May to June. They call these cropping seasons Talon and Kintoman respectively.

There are different varieties of rice being planted in the province of Benguet. There are about 83 rice varieties being cultivated. Some of these are the diket white and red, balatinaw, red rice, white rice. I was surprised to learn that each town has its own rice varieties. Good thing about this rice is that it is organic.
Posted by Edwin Antonio at 5:53 PM