It was exactly a year ago when I went to visit the province of Chiang Rai in Thailand. From Chiang Mai, I took a package tour and the trip was about one hour dropping by and later headed to the Golden Triangle. 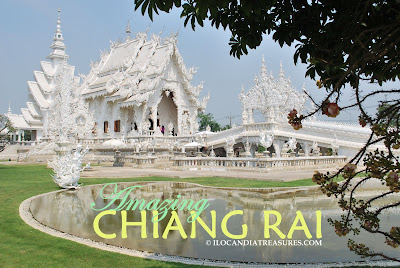 Chiang Rai is the northernmost part of Thailand. It is bordered by the Shan State of Myanmar and Bokeo of Laos. It was a former part of the Lannathai kingdom for many centuries and became a province of Thailand in 1910.

This was an exciting trip because I saw the highest natural hot spring in Thailand (Nampuron Tavieesin). The hot water really gushes from below and the height is about 5 meters. The temperature of the water is at 85 degrees centigrade. I saw some women vendors boil the eggs in the hot spring water. It was just amazing to see that it only takes for about 3-8 minutes to boil the egg. It’s also exciting to boil your own basket of eggs. Each basket cost around THB20. 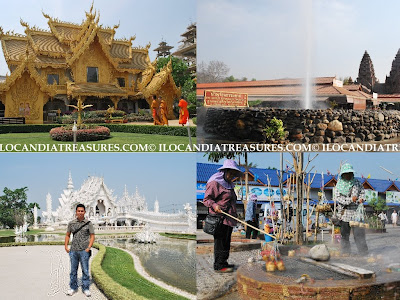 Another great attraction in the province is the white temple. It is rare that you see this kind of temple. Gold is the usual color of temples in Thailand. It is a contemporary unconventional buddhist and Hindu temple located in the province specifically in Northern Thailand. They call it Wat Rong Khun in Thai and its construction started in 1997.

They say that its style of white color and white glass would signify Lord Buddha’s purity and wisdom respectively. The design was really stunning. I had to cross its bridge to get inside. The bridge signifies the cycle of rebirth and the big circle with fangs I saw was the representation of hell or suffering. I removed my shoes upon entering. I saw the four walls and even the ceiling with paintings. Bizzare modern images were depicted on the paintings such as the Batman, Spiderman, Keanu Reeves of Matrix, Coca-cola and even the images of President George W. Bush and Osama Bin Laden.
Posted by Edwin Antonio at 7:58 AM