The Ilocano word for food is taraon. I would like to feature some of the foods I have seen and tried during the food fair in Begnas Festival in Galimuyod, Ilocos Sur in their unique presentations and the exotic food they served to us during the Gameng Festival in Solsona, Ilocos Norte. Here are some of the dishes: 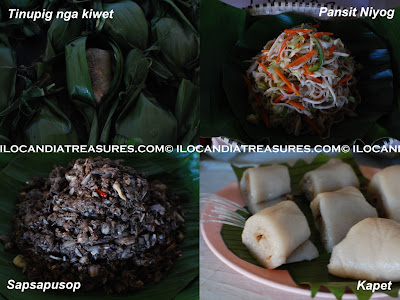 Tinupig nga kiwet – is a grilled eel wrapped in a banana leaf.
Sapsapusop - is a stir-fried banana blossom.

Pansit niyog – is a stir-fried noodle-like shredded coconut meat mixed with other vegetables. 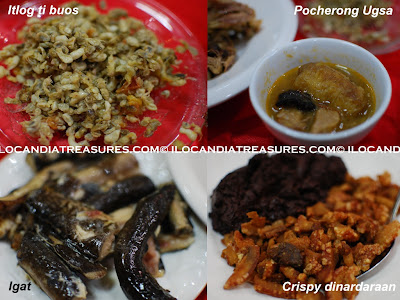 Kapet – is made of glutinous rice. Its tikoy but rolled with latik.

Itlog ti buos – is the ant’s egg. It is usually harvested during the summer season from the leaves of mango tree. Its an exotic food. This is sauteed in garlic and tomatoes.

Igat - eel that has been broiled.

Pocherong Ugsa – is a Tagalog dish with pork but added with dried venison. It is a stew composed of cabbage and ripe bananas. 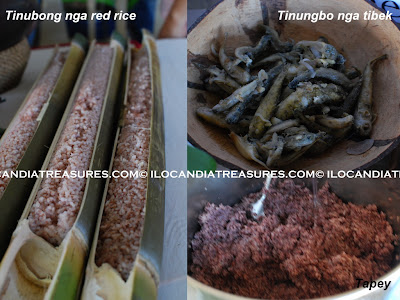 Tinubong nga red rice – nutritious red rice is placed in a bamboo tube and was cooked in it.

Tapey – fermented red rice that can intoxicate. It is the origin of the rice wine.
Posted by Edwin Antonio at 5:05 PM