When I first heard of the word ipon I thought it was hipon (shrimp). It was a totally different fish. Ipon is actually very tiny specie of fish being caught only in season. It appears in the months of early as August, September, October, November, January to late as the month of February. 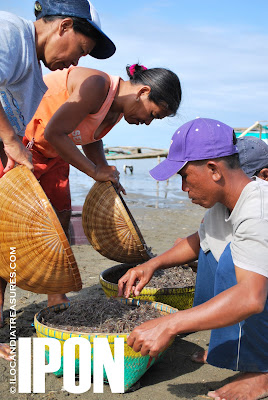 It’s a newly zygote fish, with the scientific name of sycyopterus lachrymosus. This small fish that measures about 1 inch in length and ¼ inch in diameter is only endemic to the provinces of Ilocos Norte, Ilocos Sur and Cagayan Valley.

It is also called a lunar fish because they only appear after counting ten days from full moon. They can catch this fish from 3-5 days once in a month. Fishermen make one harvest in the morning and one in the afternoon. I have asked the old folks where does ipon comes from. I was told of a theory that a huge egg hatch in the middle of the water. Another is that it comes from the sea water to migrate into the river water and later on when it grows bigger it becomes the bukto. Still a mysterious fish. 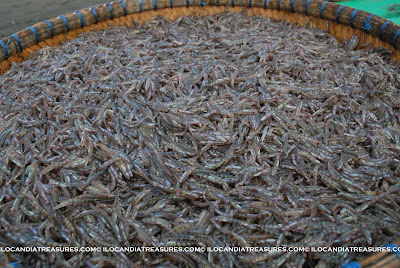 I was lucky to cover and document this catching of ipon in the fishing village of La Paz in Laoag City two years ago. Village folks were so kind to take me by the boat to the center of the puyupuyan or estuary of La Paz where the ipon are. I saw men do the daklis, pulling the huge net, helping each other to trap the fish. They transfer their catch to the boat and bring it to the ladies on the river bank for them to wash and clean by the use of gakko, a woven strainer. They again place it to the banyera and dispose it in the wet market of Laoag. I was just amazed that people in Laoag City go crazy over ipon when it is in season. Most of the locals trooped to the market to buy a kilo or so of this very tiny specie of fish called ipon in the vernacular. One can see a lot of people especially on its first time of harvest. Even if it’s expensive on its first release at a rate of Php 300-400 per kilogram, they would grab it. They wouldn’t mind the expensive price as long as they can get some to cook and eat for dinner or lunch. 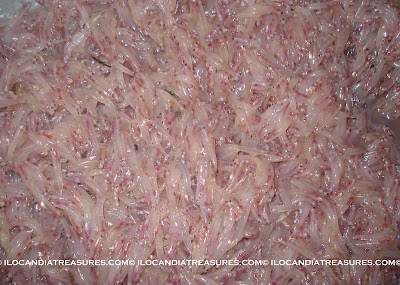 It is truly a delicious fish when it’s cooked. It is cooked as nilengta (steamed), kilawen (raw) with onions, vinegar and ginger, torta (with a scrambled egg), paksiw with vinegar and salt, sinigang (ipon soup with tomatoes and ginger), adobo, or even grilled ipon wrapped in banana leaf. People from Ilocos Sur also cooked it as a tinubong. To use it for long they turn it into ipon bagoong.

Because of its delicious taste, Ilocano communities in the United States especially Hawaii can’t stop but order bulk of ipon when they come home or request somebody to bring it for them when they couldn’t come. They store it first in a freezer here before they transport it and fly.
Posted by Edwin Antonio at 8:08 AM

Make sure it's cooked THOROUGHLY, as they carry the parasite capillaria philippensis.

Make sure to cook them THOROUGHLY, as these fish carry the parasite capillaria philippensis.

but we sometimes eat this raw or as kilawin

bukto = goby fish. they usually hatch eggs in the sea water, and that's where the ipon comes. as they grow bigger, they would return to the fresh water and grow to what we know as the bukto.