The Samiweng Singers is set to bid for the 1st Vietnam International Festival and Competition to be held on March 16-20, 2011 at Hoi An City, Socialist Republic of Vietnam. 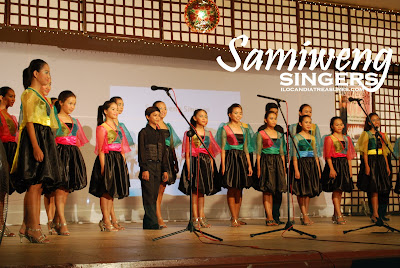 The group with their conductor Mr Sherberk Cabrales is intensively preparing for the said event and they are happy to represent the Philippines especially Ilocos Norte in this choir competition. I have seen this group of young singers during their concert in Laoag City entitled Gratias and they are exceptional.

They had a very good rendition of Choral Flourish. It is an energetic song of praise that combines traditional Latin with text. It is composed by Linda Spevacek. The song would literally mean:

Participating countries in the said choir competition are China, Estonia, Indonesia, Malaysia, Sri Lanka and the Philippines. There are nine choir groups coming from the Philippines.

Posted by Edwin Antonio at 8:00 PM

thanks for your comment. you are much welcome. i believe in your talent. i know you can do it. break a leg! God bless you all.