Hudhud is a chant, a tale of heroism by Aliguyod that originates from the province of Ifugao. It is a celebration of heroes, heroines, culture and wealth by the people of Ifugao. It’s a long tale sung during special occasions. These occasions are harvesting and weeding of rice, funeral wakes, and bone-washing (bogwa) rituals. 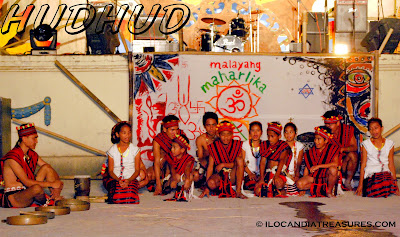 This epic chant is thought to have originated before 7th century comprised of more than 200 stories, divided each into 40 episodes. The chant is full of repetitions, metaphors, synonyms and figurative terms. It is usually led by munhaw-e, an elderly woman, with an introduction and then taken up by the mun’abbuy, a chorus of women. It takes several days to complete and recite a story. This is very difficult to transcribe so there are very few written expressions of this tradition.

The UNESCO has declared hudhud chants as a masterpiece of the oral and intangible heritage of humanity originally on March 2001 but was inscribed in 2008. The remaining narrators are now very old thus a support is highly necessary in the efforts to transmit this knowledge and raise awareness among young people. It was good that a group of young people came to perform a short version of hudhud in Ilocos Norte during the Sunrise Festival.
Posted by Edwin Antonio at 7:27 PM