Another great year had passed. Year 2010 was such a wonderful year of travel and full of great moments. The blessings poured in by the Lord are overwhelming that I am compelled to enumerate and recapitulate those good times.
In this year I was able to travel to ten countries in the Middle East, South Asia and Southeast Asia. I visited United Arab Emirates, Jordan, Malaysia, China, Vietnam, Myanmar, Laos, Thailand, Sri Lanka and India. I was so lucky to get promotional fares from various budget carriers. All of these travels were purely leisure backpacking except for China where I was invited to document the exchange program of the local students from Laoag City. I was asked if which of these countries is the most beautiful. I would tell them each country has its unique beauty. 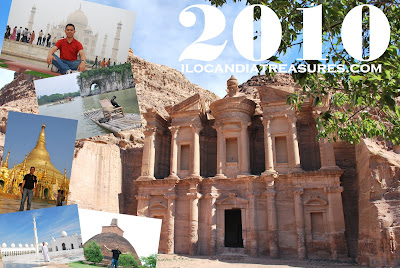 I saw two of the Seven Wonders of the World namely, Petra in Jordan and Taj Mahal in India. It was so incredible feeling to have been to these two places in a year. Unforgettable is my visit to Petra because we have to rush and get away from a flashflood that happened after the rain on my initial visit. That was exciting and not everyone can experience it. These are so majestic monuments that no one should miss this in this lifetime.

I also made local travels that included Bacolod, Iloilo, Biliran, Leyte, Cebu, Bukidnon, Iligan and Cagayan De Oro. I joined my group Laoag Mountaineers Club in trekking the 2nd and 4th highest mountains in the Philippines Mount Dulang-dulang and Mount Kitanglad respectively. It was awesome to reach these peaks and be able to commune with nature. We went to conquer also the highest peak in Ilocos Norte that is Mount Sicapoo located in the town of Solsona. 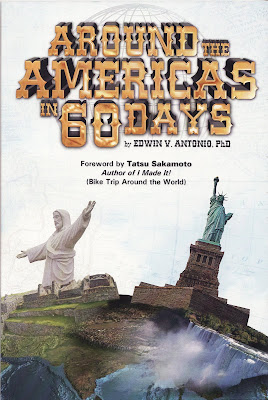 In line with photography, together with The Ilocandia Photographic Society (TIPS), we were able to stage several photo exhibitions. Glamour on a colonial setting was our theme during the Libnos exhibit in Vigan City. I organized another exhibit of the same theme entitled Kadaanan during the Nakem International Conference in Caoayan, Ilocos Sur. Another exciting and a level up initiative was the nude photography exhibit in Currimao We had one during the Sunrise Festival in Laoag entitled Saringit. A special photo exhibition was Baro A Rubuatan depicting Ilocos Norte because we were invited by Gov. Imee Marcos and that we had canvass prints. Two of my participating photographs were immediately sold at the opening. I was so happy about that.

I was able to exhibit in the various schools in Guangxi China and the students and people were amazed to see the photos of beautiful sights of Ilocos Norte.

Also this year I started and launched the Kids Project Photography to orphanage centers Tahanang Carmela d’ Amore in Laoag and at Asrama Darul Falah Perkim (ASDAF) in Kuala Lumpur. This project primarily aims to introduce to children the love of art and photography.

Something very significant that happened to me was that I authored and published my very first book entitled Around the Americas in 60 Days. It was a product of my writing in this blog. I launched it on August and the book participated in The Manila International Book Fair at Mall of Asia. I even had the opportunity to present it to US Ambassador Harry Thomas Jr. during a dinner hosted by him in Baguio City.

Thanks to the highlights of 2010 and now turning another page. Thank you to all readers for following this blog. Its flattering to meet some of you who recognize me somewhere somehow so I am looking forward to a more exciting 2011.
Posted by Edwin Antonio at 8:14 AM