Around the World on a Vintage Car

I had the opportunity to meet the family that travels around the world using a vintage car when my friend Alaric tipped me off that they are coming to Ilocos Norte to pay a courtesy call to Governor Imee Marcos. I chanced upon them at the lobby of the capitol and Tourism Officer Tina Tan introduced me to them. They arrived in Ilocos Norte on December and spent their Christmas in Pagudpud. 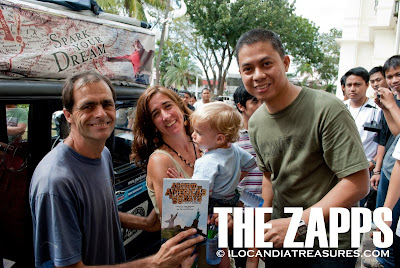 The Zapps is the family that travels the world on a vintage 1928 Graham-paige sedan car. American Herman and Argentinian wife Candelaria embarked on a journey in 2000 from Argentina to Alaska with only the two of them. It is a wild wish of the couple to go on a travel around the world that turned into a reality. Along their journey they sired four children namely Pampa, Tehue, Paloma, and Wallaby who were born in different countries. They will stop traveling when their eldest child turns ten years old for them to send their children to formal school. 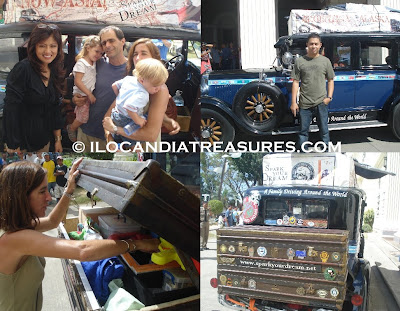 Their enthusiasm is so inspiring for everyone. They have documented their travel through a book Spark your Dream which they sell to finance their trips. According to Cande, they have visited around 35 countries in ten years. They transport their car on a ship to bring it to another place and they have 18 countries to visit in Asia. As a token of appreciation of their inspiring story, I thought of sharing to them my book Around the Americas in 60 Days from which they could also read the foreword of my friend Tatsu Sakamoto who traveled the world on a bike. They were so delighted to receive it. It’s a book for them to read along their journey.
Posted by Edwin Antonio at 1:41 AM