The 7th Sunrise Festival spearheaded by the Maharlika Artists and Writers Federation (MAWF) was held on November 24-28, 2010 in the province of Ilocos Norte with the theme Ylocosining: Hidden Treasures of the North. Several activities were held in the various towns of Ilocos Norte. 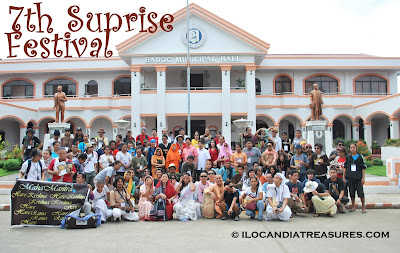 The event had a launching ceremony at the town of Badoc. The mayor warmly receives the entire delegation. There were 500 participants in this event with performers, visual artists, photographers, professors, poets, cultural workers and others. The participants came from different places such as Manila, Bulacan, Laguna, Zambales, Iloilo, Cebu, India, France, Italy, Australia and Bolivia. A lecture on the life and works of Juan Luna was delivered by the curator.

The delegation was later taken to Paoay Church for a quick stop then to the town of Batac where a discussion and interaction with local students was held at the World Peace Center. It was followed by an exciting poem and literature night held at the Mariano Marcos State University in Laoag. 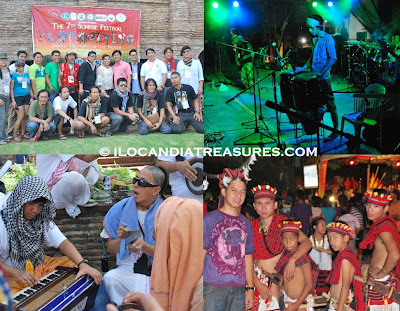 On its second day, an Ephemeral Art Exhibit on the Laoag Festival of Lights was conducted in the wee hours of the morning at the Padsan River in Laoag. Several coconut shells with gas mantles were lighted at the river banks. Some of them were placed on the flowing waters. Prayers and chants were offered then drum music was later played.

An opening ceremony of the Saringit Visual Arts and Photo Exhibit organized by artists Florence Cinco and Guijo Duenas was held at the Laoag City Auditorium. TIPS members were there to present their photos. Vice Mayor Domingo cut the ceremonial ribbon. Later, a rock concert was held at Batac with performances from different bands.

The third day was a folk and acoustic music concert held at the old plaza of the town of San Nicolas. There were performances from the local singers such as Rudy Corpuz. The Kawangis ng Tribu of Palawan, PETA group of Manila Pangalay Artists Circle, HydroSepalus, Emil Sanglay, Alex Amador of Bolivia and so many others have performed.

The fourth day was the Bunubun Children Street Art. There were some 2,000qstudents of theqprovince particupated in this cualk art event. Singising cultural night was later held at the Capitol in Laoag with the performances from a dance group from Pangasinan, Kiangan Cultural Troupe of Ifugao, Ilocos Sur Cultural Troupe, Saguday DanceTroupe, Northern Christian College Dance Troupe, Glasspoint, HydroSepalus, Unitiima and a lot more converge to showcase their talents in this festival.

On its last day and to conclude the event, a workshop on castle making, djembe, creative and fire dance was held in the town of Pagudpud.
Posted by Edwin Antonio at 2:15 AM