I don’t know why they call themselves as Hydrosepaluz but it sounds like a medical condition. We commonly knew it as the enlargement of the head. When they say big headed, it figuratively means having an attitude problem. But this promising rock band is a no-no. They are down to earth people. I personally met them during the Sunrise Festival where we jammed together at one of the banana que stands in Laoag City. They are so courteous and hilarious at the same time. They invited me to see their concert. 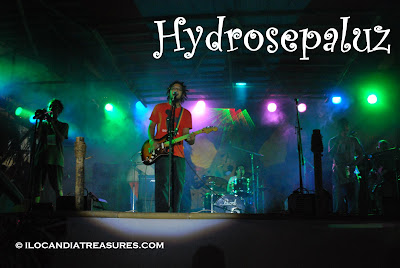 So when I went to watch them, I liked their music. They play different genre of music. According to them it’s a proto-experimental music. It’s enjoyable to listen to. It’s not heavy and the song is easy to understand. They sang Sa Gabing Ito and other songs.

This band originated from the province of Zambales. It is founded on October 2006 with its original members Makuri Makuru as vocalist and guitarist and bassist Rakizza. The new members are Juvy (Trumpet) and Buboy (Drums). They play on various gigs in Manila and other provincial areas. They do not dream to conquer the mainstream industry but only to share the music they love. So when you share something that you love, people will love it too.
Posted by Edwin Antonio at 1:14 AM