From Yangon, I went back to Bangkok to take my flight to the northern part of Thailand. We touched down in the afternoon at the local airport of Chiang Mai. I went out of the airport and looked for the regular transport to the town center. I paid only a small amount compared to the taxis on waiting. 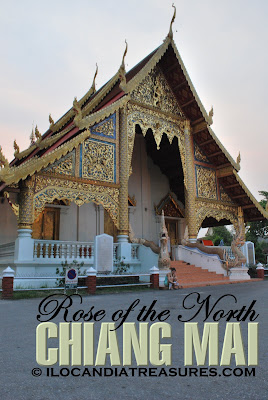 I roamed around the city downtown. I saw the Tapae Gate which is a historical landmark. I saw many tourists walking around too. I went to see some food to eat then later went for internet. I scouted for travel agents who offer a good price for an elephant safari and a Chiang Rai tour. I found Boom travel with Pranee who speak English. She gave me a very reasonable rate. I got her tour package because she was friendly. Then I checked in at Chinda house which I rented one room for 200bath. At night time, I watched Muay Thai, a traditional martial arts, at Thapae Boxing Stadium. It’s thrilling to watch because it’s not only men that fight, women also do.

Chiang Mai is located in the Kingdon of Lanna or Northern Thai. Chiang Mai means new city and is popularly known Rose of the North. It is the largest and most culturally significant city in Northern Thailand. Its laid-back charm primarily attracts the visitors. It has cooler weather because of its mountainous base. The city is situated on the Ping River a tributary of the Chao Phraya River and its located 700 kms from Bangkok. 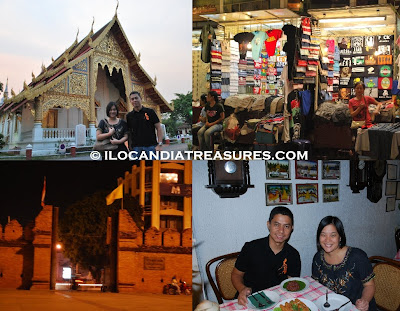 The following morning I was picked up by a van with a group of visitors from my accommodation on to a Chiang Rai adventure. We visited the Golden Triangle where Thailand, Myanmar and Laos shares border. After coming back to Chiang Mai in the early evening, I went to shop for some souvenirs at the night market.

Then a day after, it was my Elephant Safari experience which I enjoyed so much. It was very Thai to see many elephants. I went on a ride with an elephant going up and down the hills and crossing the river. Watched elephant show. Had bamboo rafting, visited a waterfalls, orchid and butterfly farm and the Lisu tribe village. In the early evening my good Thai friend Baralee Mesukh whom we call Cee, met up with me. She took me to the one of the oldest Buddhist temple called Wat Phra Singh. She treated me for a dinner with traditional Thai food at an old resto. We reminisced the good times of our ship experience in Japan and to other ASEAN countries. Lastly, she sent me off to the bus terminal. I bought a ticket and I was surprised to learn that they had a different year 2010 was 2053 for them. I bade her goodbye and headed back to Bangkok.
Posted by Edwin Antonio at 10:49 PM