Around the Americas in 60 Days is off the press

Finally after a series of rigorous trials and challenges in publishing that this book went through, Around the Americas in 60 Days is now off the press. It has been released and distributed this month on all the outlets of Central Books located at SM Megamall in Mandaluyong City, Glorietta 3 Mall in Makati City, Ever Gotesco in Rector Avenue Manila, main office at 927 Quezon Avenue, Quezon City and provincial stores GV Building in Cebu City, Robinson’s Place in Iloilo City, Aldevinco Shopping Center in Davao City and at Limketkai Mall in Cagayan De Oro City. 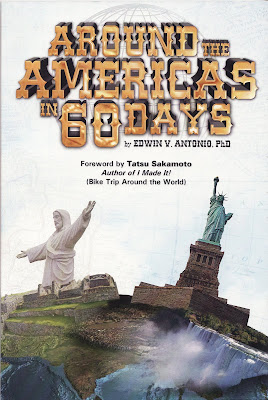 This is a chronicle of the author’s solo journey to five countries that include United States of America, Canada, Mexico, Costa Rica and Peru. Foreword of this book was written by Japanese Tatsu Sakamoto, author of I Made It (Bike trip around the World).
Posted by Edwin Antonio at 8:48 AM