The Maharlika Artists and Writers Federation annually holds an arts and literary festival officially called Sunrise Festival. This is its seventh year to celebrate the talents of artists and writers with the theme Ylocosining: Hidden Treasures of the North. It is slated on November 24-28, 2010 in the province of Ilocos Norte. 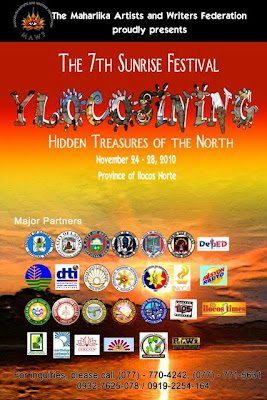 This will be a showcase of great works of respected artists and writers as well as that of budding ones from the various organizations in the country. Several agencies are sponsoring this affair. The Ilocandia Photographic Society is one of the major partners of the said event.
Posted by Edwin Antonio at 4:08 PM