Since my friend An has watched this water puppetry several times, he sent me alone to Thang Long Water Puppet Theater located at Dihn Tien Hoang Street to watch this popular show in Hanoi. I bought the ticket at 40,000dong for the last show at 8pm. They also require payment for the use of personal camera at 15,000dong but I noticed that they were not that strict in inspecting the tickets for the camera. 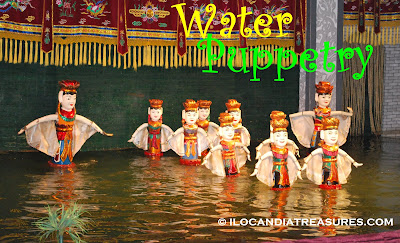 It was about one hour show and a lot of foreigners watch this. It is a Vietnamese cultural experience and a folk art that was developed by rice farmers during the flooding of rice fields. They could not plant so they had so much free time to do this form of art. The villagers would entertain each other with this puppet play. This folk art could have died twenty years ago if not with the initiative of its government to revive it recently and eventually boosted the local tourism industry.

The puppets are made out of wood and then lacquered. Large rods are used to support the puppets underwater in a waist-deep pool which are manipulated and controlled by the puppeteers who are hidden behind the curtain. At the end of the show, puppeteers showed up for the audience to see. 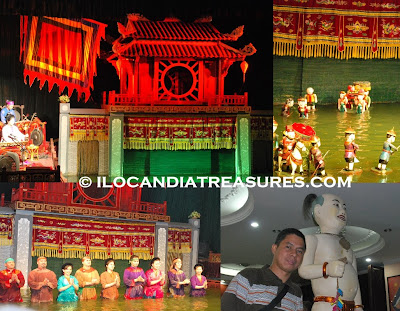 The program started with the raising of the festival flag. First part was the show of dragon dance followed by a buffalo with a flute. There was the agriculture, catching frogs, rearing ducks and catching foxes, fishing, harvest festival, lion dance, phoenix dance, a depiction of the legend of the restored sword, children playing in water, boat racing, unicorns play with ball, fairy dance and the dance of four holy animals.

It was an amazing show. I did enjoy this water puppet performance that has been enhanced with the accompaniment of orchestra and narration in English.
Posted by Edwin Antonio at 1:42 AM