On our visit to various schools in China, we were given time to play with the local students and teachers of the traditional games played in the country. One unique game is the bamboo dance which we played several times in various schools. It can be a dance as well as a sport. Bamboo pole dance is a team activity that employs the use of eight poles of 4meters each held by boys to rhythmically move and slide over the two 5meters poles that serve as pillow poles. The players jump and hop until they nip between the poles and eventually expelled from the game. The survivor or winner will be lifted up seated on the bamboo poles. 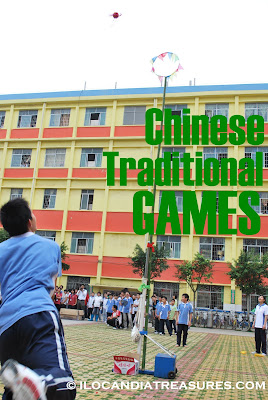 I have seen the throwing of the embroidered balls to shoot in a ball net atop the bamboo pole which is uniquely Chinese. These balls are basically red in color with some attached strings. This is a traditional game of the Zhuang nationalities in the Guangxi Autonomous Region. Originally it was a bronze weapon used in throwing during war and hunting and later became an embroidered bag thrown for entertainment. These balls are used during Spring Festival where boys and girls engaged in an antiphonal style of singing where their feelings were expressed through songs. A girl throws the ball to a boy whom she set her mind on. The boy should give a quick reaction. The boy ties a gift to the ball for the girl and if accepted means she agrees to the courting of the boy. What an amazing history behind this traditional game. 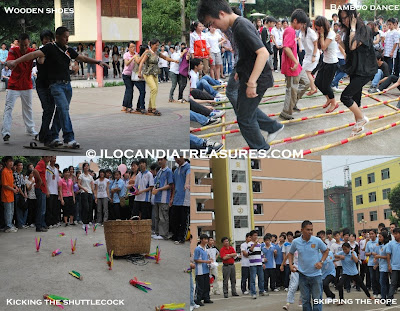 I enjoyed so much skipping or jumping rope with several players coming inside the rope one by one. This was traditionally called “jumping one hundred threads” because the rope was made of several separate ropes out of the materials like grass, cotton or straw coated with wax. It can be played in single or groups. This has been played in China for more than 1, 500 years and is popular during Spring Festival.

Wooden shoe competition was a tough one if co-players don’t have good feet coordination. It was just easy if they follow and go together. Kicking the shuttlecock and aimed to shoot at a basket. This is called the shuttlecock game where it employs a flying object made out of feathers. The shuttlecock is familiar to us through badminton.

Crab back balloon was enjoyed by the students competing with each other where a couple inserts a balloon on a back to back position. Legging running race is a group game where their legs were tied side by side and race to get to the finish line. 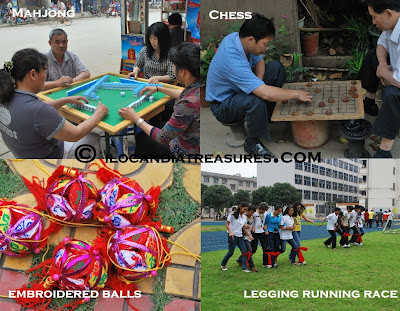 While going around town, we have seen some other traditional games such as the mahjong and Chinese chess. The latter, also called Xiangqi is a two- player board game with simple disk pieces. This game is like a battle between two armies with the objective of capturing enemy’s “general” piece. The unique movement of pao or “cannon” piece is a rule that prohibits the generals from facing each other directly. The board features river and palace that prohibits the movement of some pieces. This is a common pastime in Chinese cities and that is why I saw locals often play this game on the streets.

Lastly, mahjong is a game for four players that entails skill, strategy and calculation and a certain degree of luck. This game employs the use of a set of some 152 tiles with Chinese characters and symbols. Each player starts with thirteen tiles then draws and discards tiles until player completes a legal hand using the 14th tile for form four groups and a pair. There are a lot of variations that a player can make. This game is popularly played as a gambling game.
Posted by Edwin Antonio at 6:24 AM