Tea culture refers to the procedure of the preparation of tea, the equipments used in making it and the occasions where tea is consumed. Tea ceremony in China really differs from that of Japan which I have experienced. There were two occasions where we were hosted tea ceremonies on our visit to China. 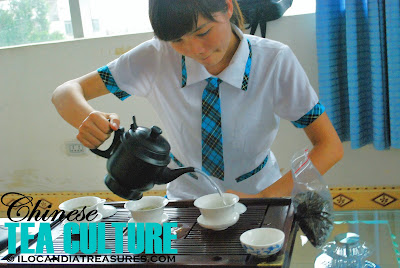 After a dinner reception, Mr. Chen, secretary general of the Department of Education of Laibin tendered us a tea party at his home. He has a tea table made of special wood where they bath this and rinse the teapot and the cups with hot water before using. It has a drainage tube. I have seen a tea pot made in a turtle form. The hosts prepared ginger tea which was poured into our tea cups and we put in some bits of round crackers. There were also rice cakes served with the tea.

The second one was during our tour of the Laibin Vocational and Technical School. After a superb lunch, we were taken to the tea room for some orientation and demonstration. We were served with jasmine tea. 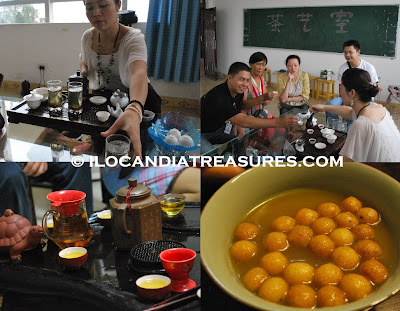 I have learned something during our tea class that to express gratitude to the person who served the tea, the person may knock his bent index and middle fingers or any form of finger tapping on the table in case one can’t say thank you at that moment because of chatting. This custom is common in South China that originated from Qing Dynasty when Emperor Qian Long traveled through the empire. The servants were not allowed to reveal their master’s identity so one time at the restaurant, the emperor poured in tea to his cup and to the servant’s cup as well. Out of huge honor felt by the servant, he cannot kneel or kowtow so he just bent his fingers on the table.

Tea drinking is customary in several special circumstances such as paying respect to the elders, on family gathering, when making apology, in expressing gratitude to their elders in one’s wedding day, for connecting large families on wedding day and to pass on the tradition.

I have observed that Chinese people like drinking tea a lot. Every after meal they drink tea or hot water. Chinese tea is used in traditional Chinese medicine and Chinese cuisine which makes them really fit and healthy.
Posted by Edwin Antonio at 10:11 PM