Calligraphy is the art of making beautiful or elegant handwriting. It is a type of visual art. A fine art of skilled penmanship. Some 500 years ago before the invention of the printing press, calligraphy was the way books were made. They were handwritten by a scribe working in a scriptorium. It was done on a quill and ink onto materials like parchment or vellum. 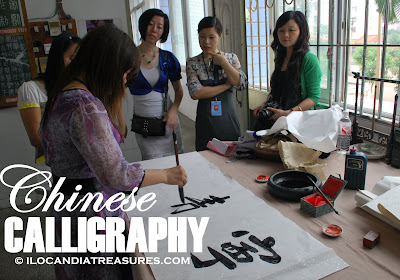 There are three main types of calligraphy namely: Western or Roman, Arabic and Chinese or Oriental.

In Asia or in the Orient, calligraphy has been practiced as a major aesthetic expression. Calligraphy was first used in China from the 5th century BC and it was considered equal or even superior to painting. It started with a simple seal script known as chancery script. The strokes vary in its widths and the edges and ends are sharp. When they perfected the brush in 1st century AD, stylization of chancery script was made possible into regular script. 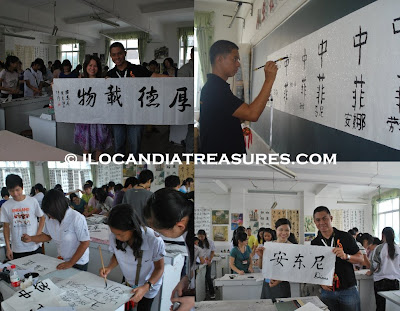 Calligraphy is highly valued also in Japan same with that of China. It was practiced in 7th century AD and they invented the syllabic script which was based on Chinese characters.

We were taught another great form of art at No. 1 Middle School of Laibin in China that is calligraphy. We were given brushes, ink and paper to write on our names. The calligraphy teacher gave an orientation to us at first then followed by hands on. We wrote our names on it. It really takes artful strokes to create a masterpiece.

The teacher made one gift for me with a nice quote. She also gave me a huge brush as a souvenir. This is another experience that someone can keep. Its fun and very educational.
Posted by Edwin Antonio at 12:01 AM