Early morning around my hostel in Yangon, I saw young monks and old alike who were roaming the streets going house to house. They always walk on a single line. They were uniformly clad in their robes and holding pots to place the collected food and alms from the neighborhood. I heard that the monastery was just close by so they were always apparent in the community. These were some of the groups participated in the Saffron Revolution attributed to their robes’ color during the anti-government protests in 2007 against the fuel price increase as immediate cause. 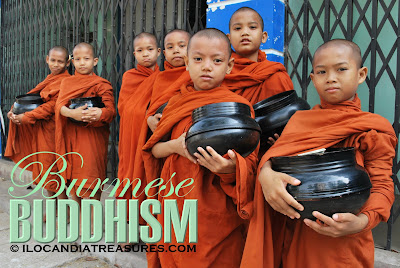 Obviously with the presence of the pagodas in the country signifies the religiosity of the people and their adherence to the principles of Buddhism. The very landmark of the people’s faith is the majestic Shwedagon Pagoda where I witnessed people worship the images of Buddha. They pray solemnly with their hands clasped together and bow down. Some people hold and pray the rosary in their hands. I learned from a Catholic priest friend that all other rosaries of other faiths originated from Buddhism. I saw people who bath and pour water several times to an image of Buddha to bring luck in their lives.

I was amazed also that a multitude of young girls in robe and shaven heads was sitting side by side. They recited a prayer. They are novitiates to become nuns. Novice is called samaneri whereas a fully ordained Buddhist nun is called bhikkhuni. They are only fully ordained after reaching the age of 20. Samanera is the term for novice monk and fully ordained monk at age 20 to be called as bhikkhu. Both males and females follow the monastic discipline called Vinaya, a set of rules. 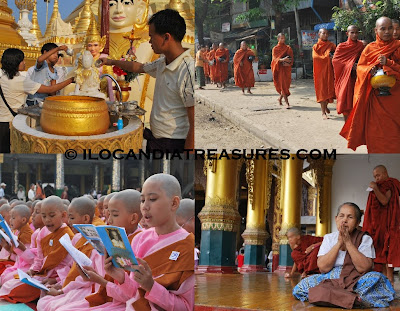 There is about 90% of total population of Myanmar affiliated to the Buddhism religion predominantly in Theraveda tradition. Collectively known as Sangha are the monks who are the venerated members of the Burmese society. The culture of the country is synonymous to Buddhism. Most of the events and festivals are related to their faith just like the water festival as a Burmese New Year celebration.
Posted by Edwin Antonio at 7:44 AM