Boklan is derived from the Ilocano word Kabobokelan which literally means "where bounties of seeds are." This art is a symbol for the abundance, steadiness and hope of the Bigueños, a tribute for the bountiful harvest. The value meaning of this art is not just the image of the farmer and his carabao but also of his farm products including the seeds that make up a healthy community. This art showcases the unique spirit of support and cooperation among the stakeholders in community building through the arts. 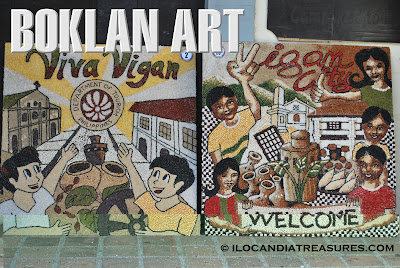 We went to Nueva Segovia St and I have seen several groups of people busy designing and pasting the seeds on their canvas. They depicted a scene of happy people with the various landmarks and symbols of Vigan in their art designs. They made use of different kinds of seeds with different colors. Some of them were the yellow corn, black and white beans, green mongo, and red bugayong seeds. They painstakingly arranged and pasted every single seed in the board with white glue. 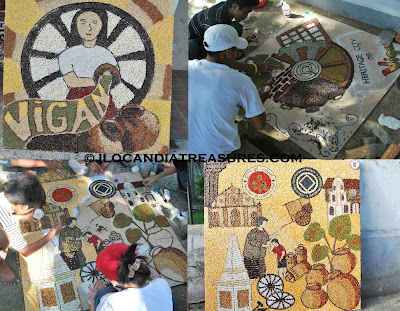 They started early in the morning and completed them late afternoon. These artworks really took time. They paraded the artworks at the city and were judged individually which one is the best.

This is truly an exposition of the bounties of land as well as the artistry of the locals.
Posted by Edwin Antonio at 3:47 AM