This song is a selection from Bailian. It’s an ethnic musical acted by the minorities of Guangxi Zhuang Autonomous Region. Bailian tells a romantic story of Bailian and Shangui. Pan Ge means singing in antiphonal style. An ensemble is divided into two or more groups performing alternately as separate groups and then in unison. 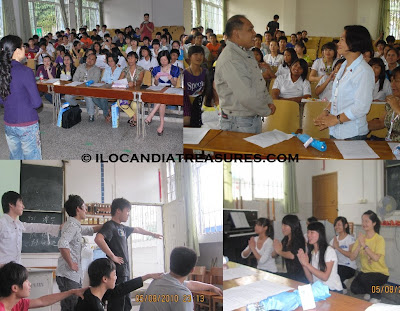 Generally, the form of Pan Ge is questions and answers. In this way, people of ethnic minorities show their hopes of life, their talent and even love and admiration to the opposite sex by way of singing.

We were fortunate that our team was given a short music class at No. 1 Middle School of Laibin. The music teacher was so good in singing. She even played the piano. It was so fun to be singing a local song with the Chinese people.

At the end of the class, two groups composed of boys and girls performed the Bailian Pan Ge with actions and alternately answers each other.This was truly entertaining. Immediately after they performed each one us were given the Chinese embroidered ball which is believed to give you luck in finding your special someone. This is also used in the traditional throwing game.

Posted by Edwin Antonio at 5:13 PM