On my fifth time visit to Bangkok in Thailand, I went on a transit for which I am bound for Myanmar and a visit to Chiang Mai in the northern part of the country. I was alarmed at first with the Red Shirt protest issue however my trip went smoothly.

Bangkok is the capital and the primary city of Thailand, a country with a constitutional monarchy headed by the longest reigning King Bhumibol Adulyadej. The country’s former name is Siam and it is the world’s 50th largest country in terms of total area. It covers an area of 513,000 sq.km. Metro Bangkok has an area of 7, 761.50 sq. km.

Bangkok has the world’s longest place name with 168 letters. Krung Thep Mahanakon Anom Rattanakosin Mahinthara Ayuthaya Mahadilok phop Nopphrat Ratchathani Burirom Udomratchaniwet Mahasathan Anom Piman Awatan Sathit Sakkathattiya Witsanukam Prasit. This poetic name is abbreviated as Krung Thep meaning City of Angels. This is the full meaning of the long name: “the city of angels, the great city, the eternal jewel city, the impregnabe city or God Indra, the grand capital of the world endowed with nine precious gems, the happy city, abounding in an enormous Royal Palace that resembles the heavenly adobe where reigns the reincarnated god, a city given by Indra and built by Vishukarn.”

I checked in at a hostel called Discover where on a Friday, the owner usually hosts a party for the backpackers. It was a barbeque party where I met some of the Westerner guests. Prior to this, I spent my day going around downtown. I learned to go on my own this time. I have tried all modes of transportation that includes the MRT, tuktuk, motor taxi, boat & bus. I rode a government issued tuktuk which can take you to the landmarks in the downtown for about 30bahts only. 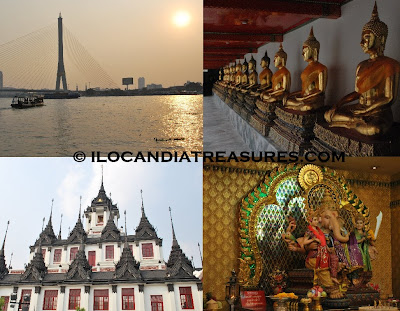 I visited a sacred temple called Wat Sitaram. It is located at Pomprapsattruphai District. The images of Buddha are pretty amazing here. I have seen the white Buddha and several stupas. I was taken by the tuktuk driver to the jewelry stores. I checked it but did not stay that long. I have crossed the Chao Phraya River by boat. From a distance one can see the beautiful Rama VIII bridge against the sunset background. At the station, I have seen few people buy food and feed the school of fish at the river. It was so amazing to watch them feed. The pigeons compete with the fish for the feeds.

The highlight of my visit to the city was seeing Wat Po. It is the Temple of the Reclining Buddha located at Phra Nakhon District just adjacent to the Grand Temple. The temple is the birthplace of the popular traditional Thai massage. It is home of the more than one thousand Buddha images. The reclining Buddha is gold plated with a measurement of 46 meters long and 15 meters high. It has mother of pearls on his eyes.

To cap my day, I treated myself with some Thai noodles and the papaya salad. This was just another great adventure.
Posted by Edwin Antonio at 7:53 PM