As a result of painstaking process of binatbatan where one has to beat the cotton pods with bamboo sticks until the seeds are separated from the fluff at the initial stage of weaving plus other important procedures, a beautiful textile called abel iloco or inabel is produced. 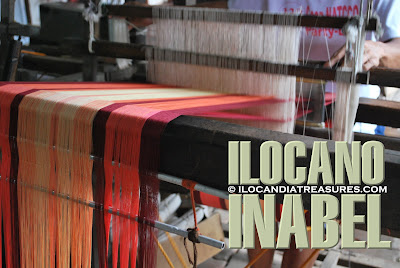 Glenn, my local friend took me to Rowilda’s loom-weaving shop in barangay Camangaan in Vigan City to show me how they do the weaving. I was surprised to see a very old woman who has been preparing the yarn or thread to be used in the weaving. There were several looms I saw in the shop manned by men particularly who were busy weaving when we arrived.
Rowilda shop is owned by the Panela family with Dominico and Milagros couple. They named it after their only child’s name. Dominico started his loom weaving business in 1977 equipped with his acquired skill from his ancestors. It was stopped for lack of capital and revived it in 1989 when he came back from working abroad. He bought some of the textile weaving machines of his neighbors when they started to move and work abroad. Rowilda has eight weavers that include the couple. 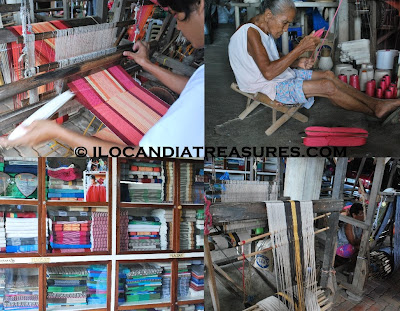 I have learned that dyeing of the thread is very crucial in the textile weaving. The people in the industry used to go to Mangaldan in Pangasinan to have their yarn or thread dyed with black plum which is locally known as sagut. Nowadays, dyes are all synthetic and chemical-based. They order their thread or yarn from Manila and Dominico does the spinning of the yarn so as not to produced tangles, if not it will be wasted. They kept on experimenting new designs and new products.