On Fishing at Adams

While I was under the hanging bridge in Adams, I noticed that there was a group of young boys at the Bolo River who were busy submerging their heads on the water. I thought they were swimming but when I went closer to them, they were actually fishing. They were naked and some were on their underwears, with a little fish basket called alat tied around their waste. A goggle was all their equipment to fish. They just snorkel in the water and find their prey. They watch the fish and cleverly catch them with their bare hands. I was amazed by these young boys' great skill in fishing. 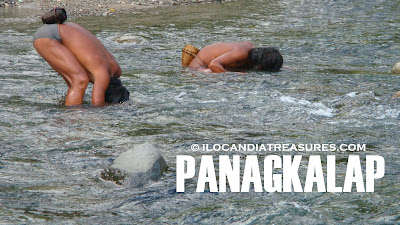 I was shown how they catch eels or kiwet from the river. They put some cylindrical trap underwater, stabilized it with some stones and leave it overnight. The trap has one way opening that when an eel enters it could not get out anymore. They collect these traps the following day.

We saw in the river some young girls who fish different kinds such as crabs or kippi, small shrimps and fish by hand with the aid of a small net.

It was fun to do fishing also when I tried at the pond of Lyns place where they grow tilapia. It was an easy thing to do. One can also do angling with the use of a hook to catch them. 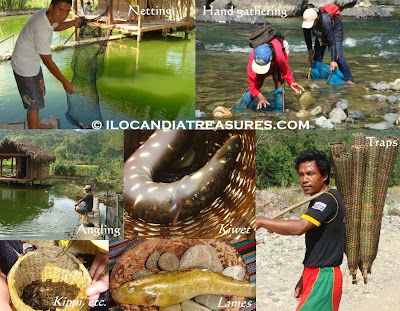 Fishing is an activity of catching not only limited to fish but also includes other aquatic animals such as mollusks. It is called panagkalap in Ilocano dialect. This is an ancient practice that dates back to the Paleolithic period or some 40,000 years ago. This is the main occupation of people living in the coastal areas and any bodies of water. There are different techniques that can be employed in fishing. These are netting, spearing, hand gathering, angling and trapping. Whatever technique you choose, I would say happy fishing!
Posted by Edwin Antonio at 10:00 PM