Fall in Love with Guilin

We were truly being given a big surprise to our visit in China that is a side trip to Guilin. It was such a place of wonderful sights and sceneries. According to popular Chinese saying, “Guilin’s scenery is best among all under heaven.” Under heaven means tianxia in Chinese. It is a phrase in Chinese language which denotes the entire geographical world that includes lands, area, and space divinely appointed to the Emperor by universal order. 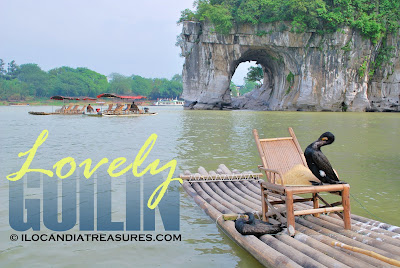 The name means “forest of Sweet Osmanthus.” It was owed to the presence of large number of fragrant osmanthus trees in the area. It was my first time to hear this kind of flowering tree. We have seen these trees but no flowers because it was not yet its season when we visited. We were amazed to see and try products made from the osmanthus flower such as cake, candy and wine. They really smelled and tasted the fragrant of a flower.

Guilin is a prefecture-level city located in the northeast side of the Guangxi Zhuang Autonomous Region on the west bank of Li River. It has an area of 27, 809 sq km with a population of 1.34 million. According to our tour guide, if our cameras and imaginations combine may give us better shots of the places. There are several hills, rocks, and caves here which may be interpreted into unique forms.

We were accompanied by Charly Zhang and Yaoyao on this trip. It was a three-hour bus ride from Laibin. We were billeted at Guilin Jinpu Hotel. We visited the landmark of the city that is the amazing Elephant Trunk Hill. It is a hill that resembles the shape of an elephant nose or proboscis. 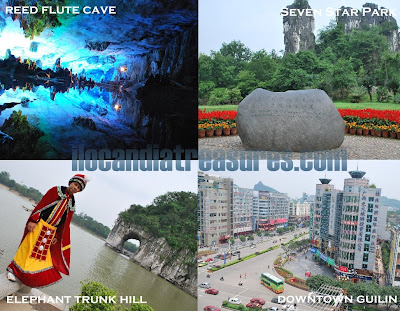 We have seen the majestic Reed Flute Cave full of stalactites and stalagmites. This measures 240m in length with three entrances. This cave is over 180 years old and it was discovered by a group of refugees in 1940s. It has received many very important persons. We walked through this cool cave reaching a portion with a small lake inside with artificial lighting.

As a highlight, we had a night cruise to four lakes and two rivers namely Li River and Peach Blossom River. On this romantic cruise we have seen the miniatures of the Golden Gate Bridge, The Arch of Constantinople. We passed by the Pagoda twin towers (Sun and Moon). We ended our night out with shopping at Zhong san Road. We haggled with the prices of the products by starting off at half going up. Lucky we were, as we bought cheap items for souvenirs.

On our second day, we visited the Seven Star Scenic Area Park particularly the historic spot where former US President Clinton delivered his speech advocating the protection of the environment then lastly we visited a gem stone museum where we saw emeralds, ruby, tiger’s eye, amethyst and many others.

With what I have witnessed on this very short trip I instantly fell in love with the beauty-laden Guilin. I hope to see her again next time.
Posted by Edwin Antonio at 8:16 PM