Just close by Mansour Hostel where I stay, I saw a stall which sells food and many men were queuing up to buy. I was intrigued so I went to check. I saw some pastries freshly baked in round pans. They look so yummy that I wanted to buy but could not penetrate because of the long line.
On my last day in Amman, after taking dinner with a group of Japanese backpackers, I asked my newfound friend Taesin Kim to join me try the pastry sold at the stall. 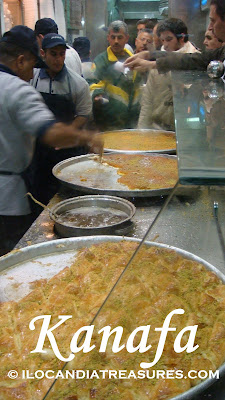 We met some Jordanians and asked the name of that bestselling pastry that everyone queues for. They told us its kunafa. Not sure of the spelling because some spells it kanafa or konafa.

Kunafa is a middle-eastern dessert consisting of a base layer made of cheese mixed with milk/semolina (or cream) with shredded wheat. It has slight orange-ish color and its often topped with syrup. There are some varieties of this such as that with noodles.

We ordered two slices of kunafa and after waiting on the line we have finally tasted a delicious pastry. It was so good.
Posted by Edwin Antonio at 5:33 PM

Flea market is a type of bazaar where second hand goods are sold at very cheap prices. It is called flea market because it was observed that buyers and sellers were active like fleas. They sometimes say that the original people and goods were infested with fleas. It is sometimes called swap meet, weekend market or car boot sale. This market can be held in an indoor or outdoor venue. It could be in a warehouse, gymnasium, tent, field or plaza. It is usually an open-air market. 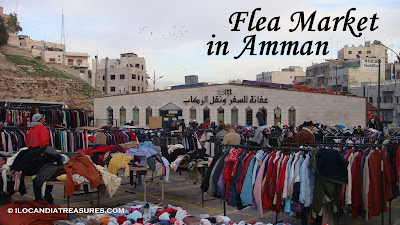 After visiting Jerash, I dropped by to this weekend market that has so many second hand merchandises from jackets, boots, shoes, and including food. I wanted to buy boots but there was no available size for my feet. It takes some patience to do a good buy. You have to really get all around moving like a flea to get what you wanted. Aside from the ready to wear items, food and snacks were on sale too. I bought from here a box of candied dates which is lower in price as compared to the supermarket. I bought a souvenir Islamic prayer bead necklace. I have seen here some Pinoys who do shopping every Friday which is also their day off from work.
Posted by Edwin Antonio at 11:57 PM

With the Chinese backpackers I met from Petra to Amman, who stayed in the same hostel with me, we went together to Jerash, an ancient city in Jordan. We took a van from the northern bus terminal. It is 30 miles north from the city of Amman. It is towards Syria. We have observed that it’s greener on this northern part of Jordan. It has fertile valleys and cold mountains perfect to grow a wide variety of crops. 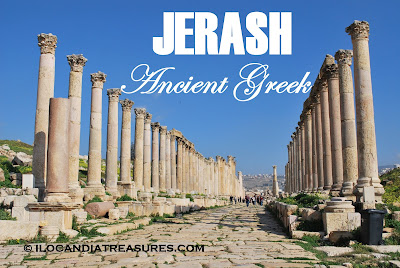 Jerash is found in the province of Jerash Governorate founded in 2000BC. This is also known as Gerasa, the ancient Greek. This is made up of ruins of the Greco-Roman city that includes the striking monuments of Temple of Artemis, Roman Amphitheater, Hadrian’s Arch, Corinthium column, Oval Forum and many others. 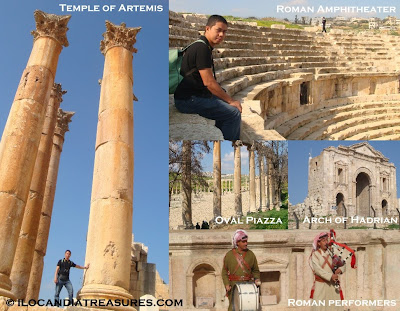 This is another must-see monument in Jordan after Petra. It is like traveling 2000 years back in time when one visits this place. This is the largest preserved archeological site of Roman architecture outside of Italy. There is also a musical performance by Romans that can be watched here.
Posted by Edwin Antonio at 2:07 AM

A Mealtime with the Bedouin Family

When Mark and I were on the top of the Grand Canyon view, we met a Bedouin family who offered us to have brunch with. We met Hawda the father and his wife with their son Mutla who were so accommodating. The wife was cooking food when we arrived. She was sauteeing the tuna and corned beef and grilling the big round eggplant. As I watched her, I took a video of her cooking. 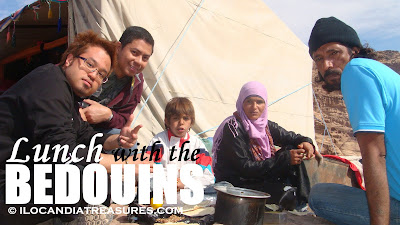 They usually take their breakfast around 10am. It could be near lunch and after breakfast. They typically drink milk in the morning. They gave me Bedouin tea to drink and we started eating the food. We had kubus and dipped this into the viands and eggplant. We had a nice talk with Hawda. He shared to us his experiences being a military man. They trained in the desert and told us that to find water he has to feed the camels with salt in order to make them thirsty and eventually look for the oasis or water. He just follows the camels in their search for the oasis to get some water too. It was very clever. He also related that the king is also a member of the Bedouin and visits them. Many foreign dignitaries and prominent people visited their place. 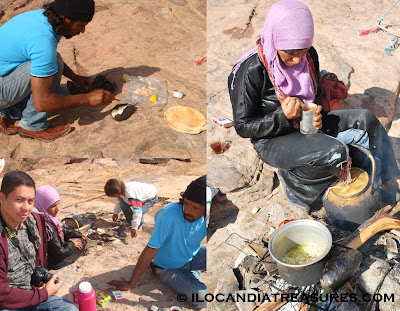 Bedouins are people of Arab ethnic group who were born and raised in the desert or mountain wilderness. They were previously nomadic. They live in black tents or caves. There are a number of Bedouin tribes. In Jordan alone, there are so many tribe groups that include Al Adwan, Beni Sakhr, Al-Tarabeen and many more. Bedouins are well known to practice folk music, dance and poetry.

We ran out of kubus and Hawda called the girl on the other mountain to give us extra kubus and instantly delivered it to us. As a sign of sharing, I gave my apple to their child. It was a nice experience to dine with the Bedouin people and experience a different culture. We thanked them for such a wonderful experience before we left.
Posted by Edwin Antonio at 7:37 PM

Immediately a day after arriving in Amman, I traveled for three hours to the ancient city of Petra with a newfound Japanese friend, Taesin Kim. I met him at the hostel in Amman. We had a separate accommodation. After checking in at my hotel in Petra I met American Mark Soni staying in the same hotel. We went together to main archeological site in Petra. It was drizzling that time when we started to trek the area. We walked through a narrow passage called Siq or the shaft and we were so amazed with the beautiful sceneries. At the end of the gorge is an elaborate ruin known as the Treasury. It was breathtaking. Incredible. I took many pictures of it. 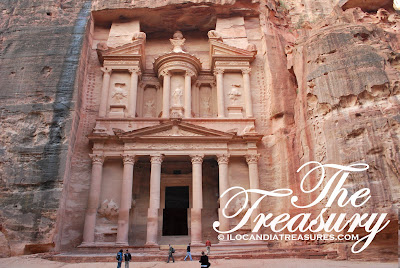 As soon as we ended our photo ops at the Treasury it rained cats and dogs. People were shouting that water was coming down. I did not care at first until I saw the water really flashing down to the Treasury. We were taken out of the area on a pick up car. We boarded in at the back then the car went through the dark narrow gorge with the gushing water. We met on board Jon Bach from Sweden who got so wet and even his SLR camera because he shot the happening. It was an exciting ride. It was good that I was able to take a video of it. It was like an Indiana Jones adventure. It was a rare experience that not everybody gets it.

Petra is one of the Seven Wonders of the World built in 1200 BC. It is a UNESCO World Heritage Site since 1985 describing it as "one of the most precious cultural properties of man's cultural heritage." This is where Jordan originated from the domain of the kingdom of the Nabateans, the ancient Semitic people. It is considered rose-red city because of the red rock cut architecture that are seen all over the place. This is also made of water conduit system that controls the frequent flash floods which I had witnessed during my visit. This system has helped in storing water for prolonged period of drought seasons.

On the following day, we went back and walked again. We saw the massive theater after the Treasury. Another ruin as equally beautiful like the Treasury is the Monastery. We took tea to drink in the store infront of it. We took time to enjoy the amazing sight until we resume walking. We saw some Bedouins who offered us to ride in a donkey. I was hesitant but when Mark approved of it then I joined him and rented another donkey for 5 JOD. I was amazed to ride with it because it can step up the ladder and even walk in the ridges. 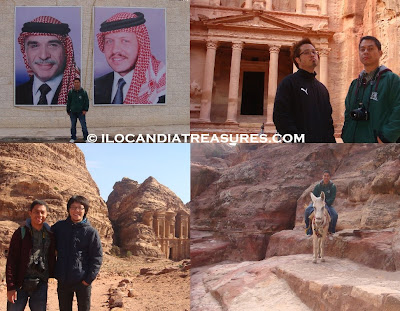 After coming from the grand canyon view, Mark has to ride in a donkey again and left me behind because he has to rush for his travel to Aqaba. So I just walked alone and took the time to take some photos with the camels and other interesting spots. It was really exhausting even it’s a little colder. The sun was up brightly. Nevertheless it was so wonderful and to see another Wonder of the World. Its really worth the walking. There was an available bus that I took just outside the gate and we left for Amman at 4pm. I met Chinese youngsters on the same bus who went with the same hostel with me back in Amman.
Posted by Edwin Antonio at 9:00 AM