Spiders are called law-wa law-wa in the Ilocano vernacular. While in Paoay church, we chanced upon children who were playing the indigenous game spiderfight. This is a traditional game now being seldom played by kids because mostly are virtual. My Canadian friend Romeo was surprised to see this game and he attentively watched it. 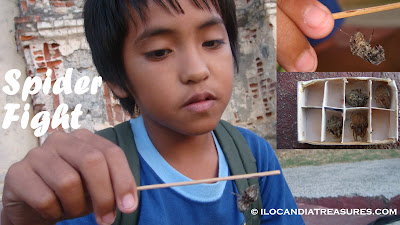 I remember when I was still a child, we used to hunt these spiders in the leaves of plants and trees during the dusk. We put them in a matchbox subdivided by a thin coconut leaf. We blew air upon them and closed the matchbox to make them sleep.

We tap the box to awaken and get them on a fight. We get a broom stick and two spiders are placed on each end. Then they move slowly to the center of stick until they find their enemy. They bite and spew web to trap the opponent. I was happy to see this game after a long time.
Posted by Edwin Antonio at 5:29 PM