This is a festival celebrated in the town of Burgos. A tribute to its town product called gamet. It is seaweed which is made from porphyra. It is considered to be the black gold of the town because it is pricey when they sell the seaweed. A square foot size of it would costs an average of Php 300. It is abundant in the coast of Burgos during moths of November to March. They even export these to other countries. This is equivalent to the Japanese nori. 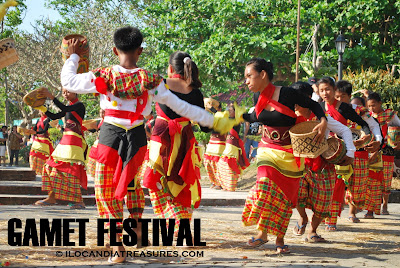 Locals of Burgos town have to collect this painstakingly from the coral stones where they are attached. They have to use a sock for their hands to collect because it is slimy and slippery. This really takes time. Aside from gathering, they have to dry or process this for a certain period of time. This is a very risky activity where collectors have to be alert in watching out for waves. There were even cases of drowning.

Various groups of young boys and girls danced in the streets of Burgos to the plaza where they went for showdown. The last group to dance depicted the stages of gathering gamet. Gamet is typically used in Ilocano salad, soups and omelet dishes. It is a healthy and nutritious food.
Posted by Edwin Antonio at 1:43 AM