My college classmate Helen Bugayong who works as a physical therapist at Tawam Hospital invited me to drop by Al Ain and I really had a quick visit to the place which is literally called “the spring.” This is located 160km east of Abu Dhabi and the second largest city in the emirate of Abu Dhabi. 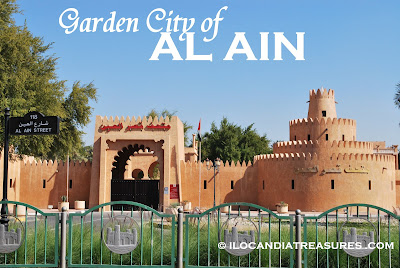 Al Ain is called the Garden City because of its greenery that includes tree-lined avenues, parks, decorative roundabouts and many oases. This is the birthplace of Sheikh Zayed, the first president of UAE and the buildings are preserved here making it cultural heritage of the county.

From Abu Dhabi, I took a bus and alighted at Tawam Hospital where I met up with Helen. I have not seen her for the longest time. We were happy to see each other again. She took me home to his housing which a spacious accommodation but it was lonely living alone according to her. She treated me to an Arabic dinner to one of the restos downtown. I had a dose of the local food. After enjoying our dinner meal she took me to her friend Ate Eve’s house and met her hubby Patrick O’conner from Ireland. I was also introduced to Dr Gazem, a Sudanese hematologist. We had jamming with wine over some good talk. 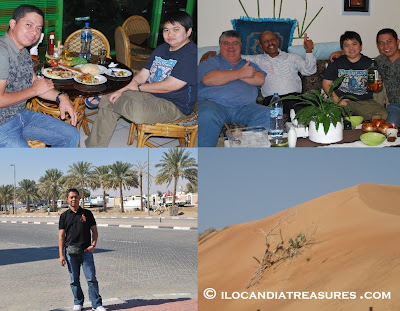 On the following day, her group decided to go on a picnic at the Jumeira Beach Park which is located in Dubai. Along the way, I saw the desert. I got a peek of the latest world’s tallest skyscraper Burj Khalifa. When we arrived at the area, there were lots of people because it was a weekend. I already brought my things with me. I was left by the group and said my goodbye to Helen as I was about to be picked up by Franie to host me in Dubai.
Posted by Edwin Antonio at 7:42 AM