My visit to the Sheikh Zayed Mosque was one of the highlights of my trip to the UAE. I was really fascinated by its Moorish type architecture. It is the largest mosque in the UAE and eight largest in the world. It was built in 2007 with an amazing construction cost of USD 545 million. It was named after the founder and first president of UAE who was buried in the same mosque. 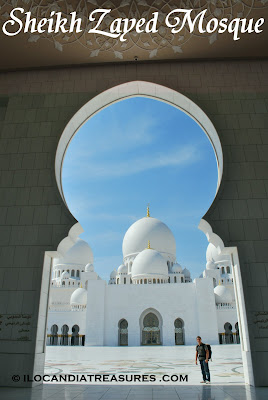 It is composed of 82 domes of seven different sizes. The outer dome has a height of 75 meters while its diameter is 32.2 meters. These are decorated with white marble. The courtyard is paved with floral marble designs. The mosque is huge that it can accommodate a total of 40,000 worshippers.

The admission is free. Every lady guest has to wear the abaya or traditional black costume with hijab or headscarf while I have tried the white kandoora for males. The shoes have to be removed and be left at the courtyard before entering. One will be more fascinated when getting inside because of the intricate designs. Just noticing the carpet’s design, so beautiful. That was the Worlds Larget Carpet with a measure of 60, 570 sq. ft. made by Iran Carpet Company. This mosque holds also the largest chandelier with 33 feet diameter and 49 feet height. This is made up of copper and gold-plated imported from Germany. 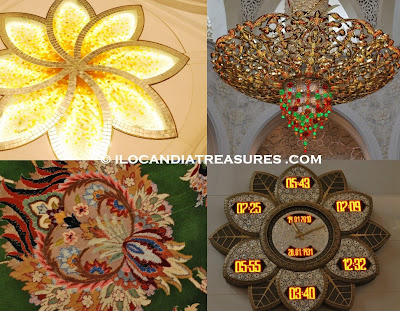 This was officially opened during the Ramadan in 2007 and opened for visit to non-Muslims in March 2008 to promote cultural and religious understanding.
Posted by Edwin Antonio at 10:50 PM

Its a true that is really largest and most beautiful Mosque in the world...there use so beautiful architect .
Overnight desert safari Abu Dhabi