I was lucky to have seen the tallest building in the world and my visit was timely because it opened recently on January 4, 2010, a week before my visit. It was supposed to be opened on 2009 as it was publicized to make a grandiose launch.
But its opening became controversial and the delay was caused by deep financial crisis. Another reason for the delay was that they have to replace some upgraded finishes. It was then finally completed on December 2, 2009. It was even reported that the emir of Abu Dhabi made contributions to Dubai to compensate deficiencies. Later, the known Burj Dubai was renamed as Burj Khalifa on its inauguration as a courtesy to UAE President Khalifa who helped Dubai. 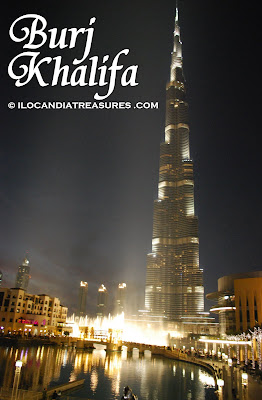 This super tall building has a total height of 828 m (2,717 ft) surpassing Taipei 101 of Taiwan at 509.2 meters which I visited in 2007. Burj Khalifa’s construction began on September 21, 2004 and had a budget of USD 1.5 billion. It has 160 floors and first in history to include residential space. Its outdoor observation deck is at 124th floor. It got its other records such as having the highest mosque at 158th floor and world’s highest swimming pool at 76th floor.

Entrance fee to this building is pegged at 100 Dirhams for a standard ticket. But one has to get into the long queues. Fast track tour is at AED 210 but it is doubled now to encourage advance booking.

Just outside the tower, an entertaining Dubai Fountain can be viewed dancing or performing to the song Bassbor Al Fourgakom. It was the same company who designed the fountains in Bellagio Hotel Lake in Las Vegas which I have also seen in 2009. The fountain is illuminated by 6, 600 lights and 50 colored projectors and water shoots into the air at 150m. It was so fantastic to watch this at nighttime.
Posted by Edwin Antonio at 10:05 PM