One of the features of Dubai Desert Safari is the Belly Dance performance. A sexy lady gracefully danced to the tune of Arabic music. It was an entertainment provided while everyone was having a buffet dinner. 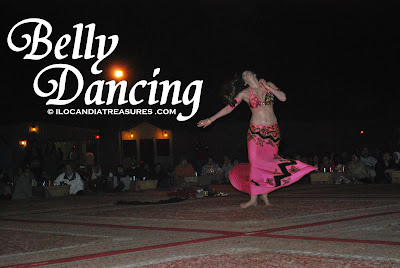 This dance is also called Arabic Dance or Middle Eastern Dance. This term refers to traditional dance especially raqs sharqi, which literally means oriental dance. This is usually a solo improvisational dance. The most featured body part in this kind of dance is the hips. It has many different forms depending on country and region. Even the West has created their own belly dance because of its popularity.

The origin and roots of belly dance are uncertain but this dance was used originally by women for women, to demonstrate or ease childbirth. This became the most popular and realistic theory in the evolution of belly dance. Today, it has become a part of the pop music and culture. It is even used as an exercise regimen.
Posted by Edwin Antonio at 1:13 AM