Calamay is a popular delicacy in many regions of the Philippines. It comes in many variations and types but basically this is a sweet sticky delicacy made of glutinous rice, grated coconut and brown sugar. This is what the calamay of Candon City in Ilocos Sur is made up of. The regular calamay is brown in color because of the brown sugar or molasses. It is thinly flattened in round shape. They have another variety that is the white calamay which is made up of ground glutinous rice cooked in coconut milk and white sugar hence giving the white color. They also packaged it in a coconut shell with the husk and hang it at the stalls of the vendors. 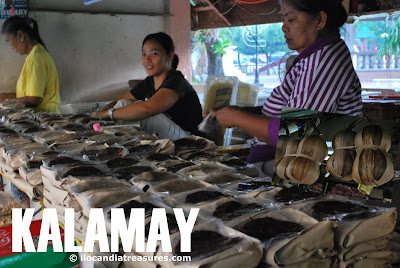 Before I went to the festival, I talked to some of the vendors at the plaza and explained to me how they make it and they later requested me to go to the barangay of Bagar to witness the actual making of the calamay. I met Caridad Dario, a pioneer in the kalamay business who owns the Caring Candon Food Product, showed me how to cook the calamay from the grating of coconut, grinding of the glutinous rice, to the continuous mixing of the ingredients in a wok over a continuous fire to packaging of these one by one. It should be placed on a plastic wrapper while its still hot so as not to stick. 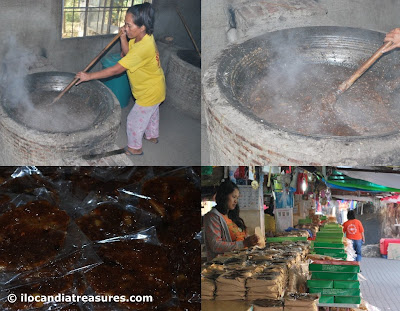 They gave me some freshly cooked calamay to eat. I was instructed to roll it first before eating to prevent sticking. I was surprised that Nana Caring gave me a pack of calamay to take home.
Posted by Edwin Antonio at 12:32 AM