There was a food festival that was showcased during the Begnas Ylocos Festival at the cultural center in Candon. I was lucky to have been the very first person to try all the recipes that they created using some of the indigenous or local ingredients. 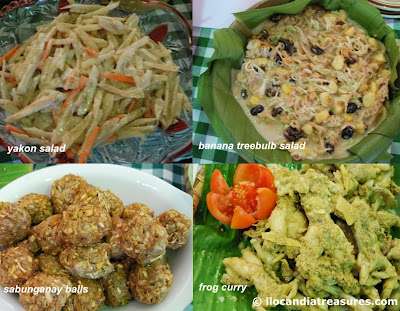 For the main dish, of course very exotic was the frog and they had it curried. Adobong ginataang igat or eel was also good placed in a banga or pot. I also tried arroz alilem which is a version of the arroz valenciana. They also had ginataang tilapia with aba or yam. On one plate was the rellenong kippi or crablets and the grilled catuday. Pansit butong was made of young coconut. Inabraw cardis was another vegetable dish.

I was amazed to find out that most parts of the banana tree was used in their recipes such as the sabunganay balls with sweet and sour sauce. This is actually the banana blossom which was minced and formed into balls and was deep fried. Another recipe was the banana treebulb salad. The treebulb was grated finely and squeezed to remove the juice and added condensed milk, cream, raisins and corn kernels.

Another entrée was the yakon salad. For the desserts, they prepared kamote cupcake, steamed cassava, sinuman and imbagkal or biko. The dishes were all yummy. This was an exciting gastronomic experience.
Posted by Edwin Antonio at 3:03 AM