Before arriving to Manila from Bicol, Bishop Utleg invited us to watch the 11th San Agustin International Music Festival. I went early to Intramuros for a walk and then had some photo ops. I attended the mass at San Agustin Church. While I was at the monastery, I accidentally bumped on to my friend Adalberto Rama who is staff member of the San Agustin Museum. He gave me a ticket to the concert. 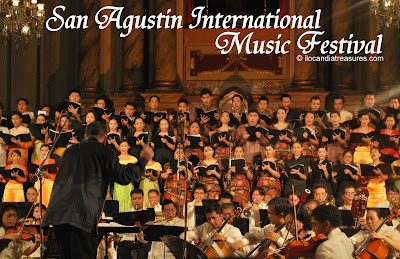 A cocktail dinner was served at the garden. After eating, Kuya Dante arrived and we went inside the church. We took front seats. Bishop Utleg later arrived with his colleagues from the Catholic Bishop’s Conference of the Philippines. It was jampacked night of concert. Locals and foreigners alike were there to watch.

Fr. Pedro Galende, Director of the San Agustin Museum opened the concert by introducing the performers for the night. He presented Ana Aguado Rojo, Spanish organist who was born in the City of Palencia, Spain. She is an expert performer in the field of baroque repertory. She played the 18th Century Pipe Organ which is located at the mezzanine floor of the church. She rendered a wonderful performance of the great classic pieces. Then she was later joined in her performance by Ariel S. Sta. Ana, a Filipino clarinetist who is a two-time winner of the National Music Competitions for Young Artist (NAMCYA). They were projected on the big screen in front of the altar.

The second part of the program was another awesome performance rendered by the Philippine Philharmonic Orchestra under the batoon of Italian conductor Maestro Ruggero Barbieri. They were later joined by great choral groups, The UP Madrigal Singers, Coro, de Sta Cecilia, College of the Immaculate Conception Chorale, Coro Amino, and the Maryknoll Sanctuary Choir. Filipino soprano Maria Rachelle Gerodias, Italian alto Simona Forni, Italian tenor Gian Luca Pasolini, and Filipino baritone Andrew Fernando were featured in this highly remarkable concert. This was indeed a fantabulous concert where the best performers of the world performed together in one great venue.
Posted by Edwin Antonio at 9:20 PM