A Great Climb to Mount Bulusan

Mount Bulusan is the fourth most active volcano in the Philippines after Mayon, Taal and Pinatubo. It is located in the province of Sorsogon in the Bicol region. It is classified as a stratovolcano composed of many layers of hardened lava, tephra and volcanic ash. This kind of volcano produces viscous lava that it easily cools off and hardens before spreading far.
This tall, conical volcano has an elevation of 1565 meters above sea level and a base diameter of 15km. It has four craters that include the Blackbird Lake. 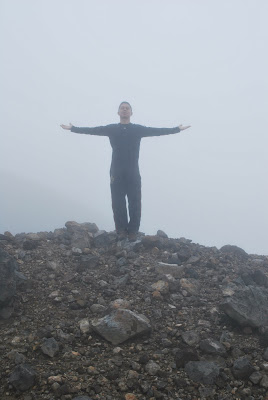 After a quick visit to the beautiful Lake Bulusan, we headed to Barangay San Roque to register. We paid 20 pesos each. It rained hard for a short while but when it stopped, Bishop Utleg offered a prayer for our safe trek. Our group has the objective of exploring mountains to appreciate the beauty of nature, to be conscious of their existence for a balanced ecosystem and to promote the protection of the environment.

We were accompanied by guides and porters led by Noel from the local government unit. We started hiking for more than five hours. It was a tiring hike since it was slippery. Along the way, it was raining. We walked to some rice fields passing through the rainforest. We have seen ancient and moss-covered trees and the giant ferns. Rare wild flowers and orchids were also seen by our group. Some alimatek got on to my skin but alertly removed them by splashing alcohol. There was heavy fog up further. We have to take breaks in between to take water, trek food and lunch. We arrived at a place close to the Lake Agingay. It was rocky with dead trees standing and some driftwoods in the midst. 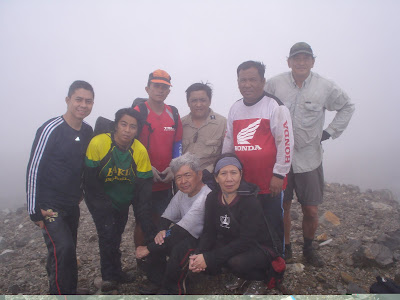 We camped on the place we found. We set up our tents. A dome tent was lent to me by the bishop. We helped each other assembled our tents and placed close to each other. Joel cooked pinakbet for our dinner. We ate supper then retired early. It was raining at night and my tent was dripping. I heard some of my neighbors drain and dry their tents because they got flooded. We managed to get some good sleep despite the rain.

In the morning, we took our breakfast then we started our assault to the peak early at 8am. We passed through the forest then stiff mountains with dried as well as green cogon grasses. It was a wet trail. It was so windy and foggy then it rained several times. After almost four hours, we slowly have seen the summit. We became excited. There were rocks and stones. We began to smell sulfur. At last, we made it to the summit. We have seen the crater lake down beneath. It was such a fulfilling experience to have conquered the Bulusan Volcano.

After photo ops, we rested as we took our lunch. Then we climbed down and it took us about three hours. It is also challenging to make the descent. But we enjoyed the sliding along the trails. It rained cats and dogs when we reached Lake Agingay. We splashed our selves with water to cleanse our muddy pants and shoes. 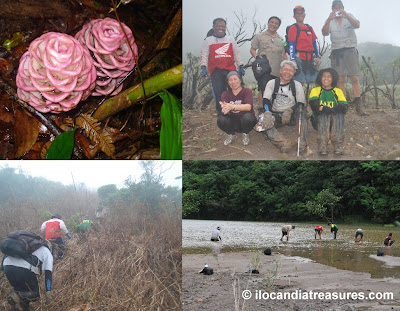 Manang Amie and Dr Tina cooked our dinner. We had some good talk while we wait for our food to cook. We had supper then retired early.

Then the following morning we broke camp. We started to hike again. We spent four and half hours going back. Before reaching San Roque, there were farmers picking young coconuts with their long stick. We bought a few of the coconuts and sipped the juice. It was a refreshing treat after a long and tiring hike.

Another surprise was a superb lunch served at Balay Buhay sa Uma resort. I took a shower with the hose in its garden. Manong Ike and Manong Dante later joined me. We rushed and packed our things at San Mateo Resort as we headed north.
Posted by Edwin Antonio at 9:21 PM