Together with my colleagues from The Ilocandia Photographic Society (TIPS), we went to cover the Bac-bacarra festival at the town of Bacarra on November 30. This is our first time to witness it being held in its hometown. We had a sneak preview of the said festival during the Ragrag-o celebration. 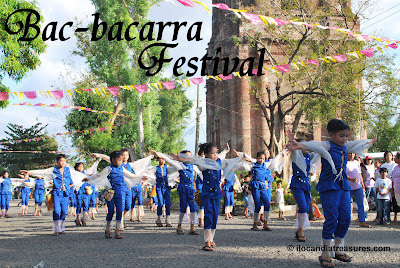 This celebration was started in the year 2005 as a revival and preservation of their cultural heritage. The legendary bac-bacarra is a freshwater fish abundant in the rivers of the town in the olden days. It is now extinct. The town’s name was derived from it. It was coined by a Spanish soldier who passed by. He asked the name of the place from a local who at that time was fishing. He did not understand his question and just answered bac-bacarra.

Fishing is the main industry in the town attributed to the presence of coastline and the Bacarra river where they get good catch of quality and high valued fish products. They owe the blessings they receive to their patron Saint Andrew the Fisherman. This celebration serves as a thanksgiving to the abundant fish catches. The highlight of the said event is the street dancing depicting the history of the town and fishing itself. In general it was not that exciting as compared to other festival celebrations because there were only nine groups of young boys and girls who participated.
Posted by Edwin Antonio at 5:17 PM