I was informed by the people from the Diocese of Laoag that 29th Canonical Coronation Anniversary of the La Virgen Milagrosa de Badoc will be celebrated on December 8. It is the feast of the Immaculate Conception at the same time. This is an annual celebration. Together with my friends Mai and Fanny, we rushed to Badoc to witness this celebration. 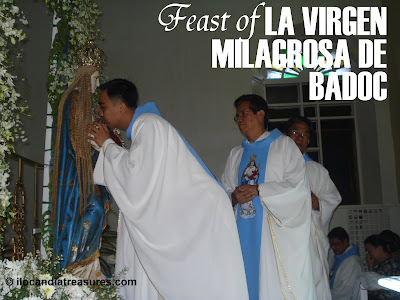 We were able to catch up the mass celebrated by Bishop Sergio Utleg. Most members of the clergy were there gathered. We were surprised that many parishioners formed a long queue to make their offertory. There were lots of handcrafted bags and baskets which were offered. I was informed that each clergy member has around two bags to receive. They were so generous parishioners. 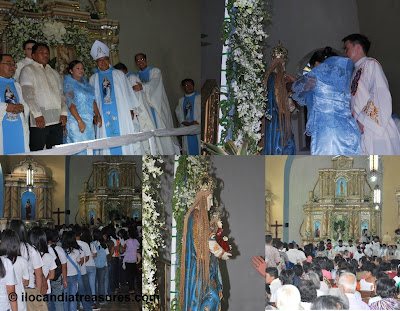 The highlight of the event was the coronation of the image of the La Virgen Milagrosa de Badoc by the Hermana Mayor of the year Mrs Rhodalyn Prieto with Bishop Utleg assisted by other priests. A canonical coronation is an act of the Pope, duly expressed through a Papal bull, wherein the Catholic Church recognizes an image of the Virgin Mary. A Papal bull is letters patent or charter issued by a pope to authenticate an image. This is now the 29th year that La Virgen Milagrosa de Badoc is being recognized. After the coronation, the people queued to kiss the image.

It was told that the image of La Virgen Milagrosa de Badoc is miraculous as well as the Santo Cristo Milagroso of the town of Sinait. According to old tales, boxes that contained the images of the Virgin Mary and the Crucified Christ drifted in the shores of Logo in Brgy. Dadalaquiten in the boundary of Sinait and Badoc. Each town had decided which statue to take. The people of Sinait chose the Marian image while Badoc wanted the crucifixion. Upon the order of their parish priests, men carried the respective images. Despite the number of men who helped to carry, the statues cannot be moved until they decided to exchange. And so the first miracle happened when Badoc was able to carry La Virgen Milagrosa de Badoc while Sinait easily lifted the Santo Cristo Milagroso.
Posted by Edwin Antonio at 3:16 PM