Bacarra is a 3rd class municipality in the province of Ilocos Norte. It has 43 barangays with a population of around 32,000. It was founded in 1778 during the Spanish rule. In that span of 231 years, it was administered by more than 100 town executives either as gobernadorcillos, capitanes municipal, presidentes or mayors. 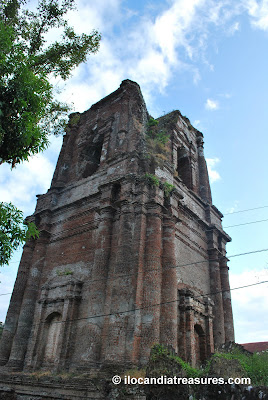 The landmark in this town and one of the famous tourist attractions of the province of Ilocos Norte is the Bacarra domeless belfry which is a part of the St. Andrew Church. It is also known as "the bowing acrobat tower of Southeast Asia." It was so ancient that this massive bell tower dates back to the 15th century. The third and top floors were lost during a powerful earthquake in the year 1913. The bell in it survived the earthquake and still hangs precariously on the tower's shattered dome.
We had photo ops at dusk time when we visited this impressive structure recently. The full moon appeared while a numerous bats flew out of the structure successively. This is an amazing sight that can be witnessed at 6 pm onwards.
Posted by Edwin Antonio at 5:56 PM